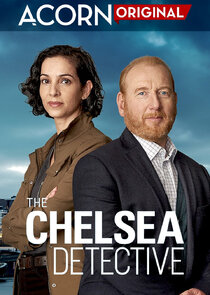 Adrian Scarborough stars as DI Max Arnold, a recently separated police officer who lives on a shabby houseboat while hoping that he’ll get back together with his wife Astrid. He's clever, determined, and perhaps most importantly, he doesn't care about wealth or status when it comes to getting justice. Raised by a local bookshop owner, he's a life-long Chelsea resident – but not part of the elite class of people who make up most of the neighbourhood. He may live in an upmarket area, but crime knows no boundaries and the dark and disturbing elements of the city manifest themselves. Max’s job is to bring criminals to book and see that justice is done. He is partnered with Sonita Henry as DS Priya Shamsie, who is a new mum, back on the beat, and with her own issues at home, most of which are of her own making.

Should you watch it? Definitely! If you enjoyed Midsomer Murders, Grantchester, or any detective series of that ilk, this is right up your alley. The stories are interesting and keep your attention. Nothing seems outlandish or far-fetched and a viewer is not asked to suspend their disbelief. The cast is diverse but there is no shoving it down your throat. The Chief Forensics Officer is played by Sophie Stone, a deaf actress. I really liked how the producers handled this angle because I have seen other shows where there is much fiddling about with sign language and then translating which stretches things out and makes an audience restless. In this series, the actress performs brilliantly and quite naturally asks Max to slow down because she can’t catch everything he is saying.

Adrian Scarborough is one of those actors that ease into the character perfectly. He is a pleasure to watch. The character is no-nonsense, gets on with the job, can be unimaginative at times, but is very appealing. His aunt is played by the inimitable Frances Barber, also a pleasure to watch. She is hilarious. For me, the only sour note was the relationship between Max’s wife Astrid (Anamaria Marinca) and Max. I found Astrid quite bland, and it was hard to believe they had been married. There was just no chemistry. Even much ado about the ownership of a coffee machine failed to convince me. However, a strong supporting cast make this series eminently watchable, and I was delighted to discover that there will be a season two!