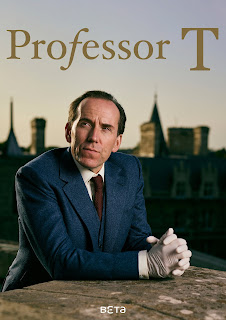 Put down whatever you are doing, make popcorn, settle back on the sofa and binge watch Professor T. Said professor, played by Ben Miller, is a combination of Sherlock Holmes (all incarnations), Hercule Poirot (ditto), and Monk. Brilliant, compulsive, definitely OCD, Professor Jason Tempest lectures on criminology at Cambridge in a very unorthodox manner that sometimes has his students confused. He is caught up in a mysterious crime at the university and this launches his alternate career as a consultant to the police. However, not everyone is happy to have him on board. A motley crew of detectives make up his team. His overbearing artist mother tries to manage his life, without much success. The crimes are unique and the solutions equally so.

Ben Miller is the perfect choice for the lead role. I loved him in Death in Paradise, although he does not simply reprise his role there. The character’s back history, somewhat tragic, is unveiled in flashbacks which are emotional and sad. He has a black goldfish named Walter. His eccentric mother Adelaide is played by the simply superb Frances de la Tour in the accepted grande dame fashion that works so well. If you loved Maggie Smith in Downton Abbey and Diana Rigg in All Creatures Great and Small, you’ll love her performance. Adelaide has a muse to inspire her art works, a Chihuahua, and although this canine is not on the same level as the inimitable Tricky-Woo, dog and dame manage to completely steal any scene in which they appear and upstage everyone else.

It’s not all detective work and deaths, though. There are poignant moments, sad moments, and truly realistic ones that reveal the fragility of human nature. The scriptwriters have taken a novel approach in constructing the series. One element that I found quite wonderful is every now and then Professor T. has visions, surreal moments that completely overtake a scene … but only he can see what is happening, not anyone else. I enjoyed this first season immensely. It’s a glowing 5 out of 5 for the professor!

Posted by Fiona Ingram at 6:51 AM No comments: