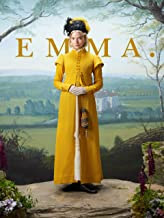 I’m a big fan of Jane Austen’s novels and their various adaptations. I loved the 1996 adaptation of Emma with Gwyneth Paltrow and Jeremy Northam. It had sparkle, panache, simmering flirtation, and real heart. Sadly, the 2020 production of Emma is all style and no substance. The good parts: stunning costumes with beautiful and meticulous attention to detail. The sets and the scenery were also quite wonderful, although much of it came across as moments or vignettes one could only look at and I never felt the characters actually lived in any of the houses/locations. They seemed to ‘pose’ in various screen moments so the audience could look at them. The colour palette, however, was also picturesque and quite lovely.

Of all the characters only Mr. Woodhouse (Bill Nighy - you can't go wrong there) and Miss Bates (the incredible Miranda Hart who managed to steal every moment of any scene she graced) were appealing. Emma (Anya Taylor-Joy) came across as pert, self-satisfied, meddlesome, selfish, completely divorced from the reality of life, and only interested in people as playthings. She had a sharp, foxy look as well. Miss Smith was as thick as a plank and boring. Mr Elton was oily but the new Mrs Elton was hideously vivacious and quite watchable. Johnny Flynn played Mr. Knightly like a ruffian and he had absolutely no grace and charm, and no chemistry at all with Emma – unsurprisingly as her character was interpreted as only capable of being in love with herself. The whole Frank Churchill brewing scandal went absolutely nowhere. I think the actors were misdirected. I also think the producers had a shallow approach that did not justice to the other themes. A big disappointment. 3/5

Posted by Fiona Ingram at 4:31 AM No comments:

I have watched the whole series of The Miss Phryne Fisher Murder Mysteries and loved each episode. Phryne is a force of nature and people just cannot resist her. Essie Davis does a great job of embodying the amazing lady detective whose manners/mores/motives were far ahead of her time, the Roaring Twenties. Detective Inspector Jack Robinson is perfectly played by Nathan Page and anyone with a shred of romance in their soul just wants them to kiss and get together. And there are some near-misses of kisses as the dramatic tension mounts. As the plots show, crime has not changed much in the last century and there is a lot for Phryne to get her detective teeth into, much to Jack’s exasperation. The period suits the drama and is well done in terms of photography and attention to detail. Phryne's wardrobe is just phenomenal and anyone who likes clothes of yesteryear will drool. Quirky characters abound, and each has a part to play. Fans of Miss Marple and Hercule Poirot will love this series. Go back in time and enjoy each tale. 5/5 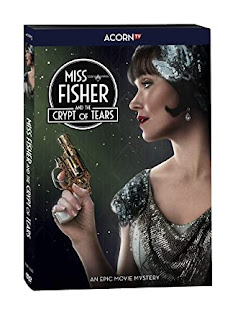 I am a big Phryne Fisher fan after watching the series and I was so hoping they would raise the money to do a movie. They did and although The Crypt of Tears is by no means perfect, it has charm and appeal. You have to suspend your disbelief and there are big plot holes, but Phryne's charm and vivacity (something of a whirlwind!) sweep all aside as she barrels along, sorting out the mystery. The romance angle has also grown from the series, something fans will enjoy. Don't expect perfection but expect a fun time in which you can forget the cares of the 21st century. The clothes are as gorgeous as ever. 4/5

Posted by Fiona Ingram at 2:09 AM No comments: