The Magic of Les Misérables

I first saw the stage production of Les Misérables when I was a drama student in London. I cried from start to finish. I recently saw the movie version. I cried from start to finish. What is it about this powerful book, written in 1862—meaning it’s 151 years old—that continues to inspire and move people? It is considered one of the greatest novels of the 19th century. The story begins in 1815 and culminates in 1832, and follows the life of convict Jean Valjean (based on a real person) in his journey from humiliation to final redemption. It’s not just about one man, however; it’s about a society in transition, politics, justice, philosophy, freedom, religion, and self-belief. It is sweeping in the greatness of the themes embraced by author Victor Hugo.
The story line and themes are so strong that it has been adapted for stage, television, and film, and remains as popular as ever. But why? I think, personally, that the passion, pain, anguish, and ultimately victory expressed by the characters resonate even now. In addition, the film techniques and inspired directing has made this recent production drive completely into the hearts of viewers. Of course, not everyone liked the movie. I have read reviews where the writers said they couldn’t wait to sneak out. It’s all about taste. Most critics complained about the singing.

Ah, the singing. I have the CD and have played it so many times that even I hit those high notes in my head. Again, it’s not about the singing; it’s about actors portraying a powerful and passionate story. They just happen to be singing! From the moment the opening scene sweeps the viewer into an epic of monumental proportions, one is lost in the story. From the visual splendour of a giant vessel being towed into dry dock, to the close-up of a filthy, weeping, cropped Anne Hathaway, it is hard not to succumb to what the performers do so well: tell a story. And that’s what writers aim to do: tell a story that moves the reader/audience. Life is about stories—people’s personal tales, and society’s grand epics.

﻿﻿ Half the story plays out against the scenario of the June revolution in France, with barricaded streets forming a backdrop of increasing violence and tension that affects the lives of smaller people in this great game of life. Hugh Jackman holds the story together magnificently with a powerful, magnetic performance. He is Jean Valjean with every fibre of his being. Contained, repressed, angry and driven, Russell Crowe (for me) epitomizes the man doing his job, if it kills him, in Javert. His voice was passable, but again (although I could hear the soundtrack soaring in my head), the visuals surrounding him—horses galloping along the beach; streets of Paris seen from the building tops: a fatal plunge to his death—all serve to add to the dimension of Valjean’s alter ego. Anne Hathaway is a beautiful, talented actress, and her interpretation of Fantine puts her into the ‘serious actress’ division. Her performance is exquisite.

Like it or love it, but see it without any expectations of soaring operatic voices. See it for what it is—an incredible story, performed with passion  by talented actors, who pour their hearts and souls into every minute.
by Fiona Ingram
(Images courtesy of Wikipedia: see links)
Posted by Fiona Ingram at 4:18 AM No comments:


﻿﻿﻿﻿﻿﻿I know I was one of the first people (lucky me!) to review Lucinda Brant's new novel, Salt Redux, because I received an ARC (Advanced Reader Copy). I love historical romance and always counted Georgette Heyer among my favourite authors, for her wonderful portrayal of the Regency era. In my mind, Lucinda Brant has done the same for the Georgian era, a time in history that perhaps has never had the publicity it deserves. Rich and vibrant, and an age of great initiative, political expansion, and economic growth, the finer details will not escape readers in any of Ms Brant's fabulous books.
﻿﻿﻿

Salt Redux is the second book in the Salt Hendon series, following on the loves and lives of the Earl of Salt Hendon and his Countess, the beautiful Jane. In the four years since their marriage, much has happened. Love and three children later, they think that happiness eternal is theirs and nothing can destroy their idyllic life. The earl’s cousin, Sir Antony Templestowe, has endured four years of exile in Russia, in the guise of a diplomatic posting. Battling with his addictions, he has come to terms with himself, and his undying love for the earl’s sister, Lady Caroline. Lady Diana St. John, the earl’s nemesis, and a murderess, has been carefully incarcerated in a remote castle in Wales as the only way to prevent her previous sins from being discovered by society, and to prevent her from committing further wickedness. This is possible because Lady Diana is, unfortunately, quite mad. She is obsessed with becoming the true Countess of Salt Hendon, and dislodging the woman she considers the usurper to her title, that is Jane. She has had four years of careful scheming and preparation. Once she escapes imprisonment by pure Machiavellian ingenuity and diabolical plotting, Diana arrives back in their lives with plans of her own, plans that include death and destruction. Will she succeed, and will happiness and love be restored or ruined?
Lucinda Brant never fails to please readers of historical romance with her lavish portrayal of her niche arena: the Georgian era. Such are the minute and careful details that the era itself becomes almost like a character in the book. However, the characters themselves tug at the heartstrings with their intense feelings: love, anguish, desire, and drama abound as various sub-plots play out in a background to the main story. The richness of the prose and the attention to all that drives the story make this a wonderful read. Tension mounts as Lady Diana proceeds with her plot to unseat Jane. The story is multi-layered and threads from the past are seamlessly woven into current events. Salt Bride was the first Lucinda Brant book I reviewed and I loved it. What a pleasure to revisit ‘old friends’ in this sequel. Although readers can enjoy the book as a stand-alone, I would recommend their reading Salt Bride first to fully appreciate the poignant aspect of the earl and his bride’s love story from the start. Highly recommended. Five stars. First reviewed for Readers Favorite


In case you missed my review of Salt Bride, the first in the Salt Hendon series, here it is:
The Earl of Salt Hendon, with good looks, fortune, and the reputation of a lover par excellence, could have any woman he pleased just by crooking his little finger. So when he seemingly lost his reason and married a squire's daughter, Jane Despard, Society is aghast. Despite being a noted beauty, Jane's reputation is clouded, an incident in her past having cast a shadow over her marital prospects. What Society does not know is that Jane and the Earl share a dreadful secret: a past encounter that brought them both nothing but misery, misunderstanding, and mistrust. Their marriage four years after that encounter is sealed so that the Earl can discharge a promise to a dying man and Jane can save her stepbrother from financial ruin. Jane holds out the hope that the Earl will finally come to love her. Her husband, alas, is deeply influenced by the scheming Diana, Lady St. John, widow of his cousin and the mother of his nominated heir, his young godson. Can Jane's love prevail and will the Earl finally open his eyes to the Machiavellian manoeuvres of the wicked Lady St. John?

It is the year 1763 and King George III is on the throne. Georgian aristocratic life is synonymous with elegance and a devil-may-care pleasure, and the upper classes enjoy a kind of amorality in their love lives. Men, and women, are inclined to take their pleasure where they choose. It is this angle, the tawdry underbelly of high society that the author captures so brilliantly in this eminently readable novel. The rakish, raucous character of the Georgian period is contrasted superbly with the sophistication of the age. The author has created a love story that fans of historical romance will relish. Details of the politics, manners, social mores, and dress are deftly interspersed within the plot lines to fully flesh out the era and the people in it. The author's characterization, even with secondary characters, is accurate and believable. The plot is complex and interesting; the author guides the reader through the maze of misunderstandings without ever giving the game away. The dialogue is witty and sparkling, with the characters' words often belying their actions and vice versa, thus further adding to the love confusion. I thoroughly enjoyed this book and highly recommend it. Five stars. First reviewed for Readers Favorite

It’s difficult finding books for boys because they are (historically) slower or more reluctant readers than girls. Action and adventure will appeal, especially if the plot captures their imagination. In Xor: The Shape of Darkness, author Moshe Sipper uses his own experiences and skills as a professor of Computer Science, working in the general area of Artificial Intelligence to create a fascinating off-world adventure.
Review: On the day Lewis Nash turned twelve, he expected to feel a bit different, maybe a bit older and wiser. He didn’t expect to turn into the shape of anything that popped into his head, like a stick insect or a dinosaur. It’s all he can do to keep his thoughts focused on being a boy. On his way home, things suddenly become clearer, starting with a mysterious explosion that blows up his home and kills his dad. Having lost his mother in an accident four years earlier, Lewis realizes he is now an orphan — but he has no time to dwell on it because a terrifying wolf man tries to grab him as he gets off the bus. A weird hooded man (Master Long), with long rabbit ears, saves Lewis. The man transports him to another planet called Xor, Lewis’s real home. To his utter disbelief, Lewis discovers that his true parents are Lord and Lady Shaper; that his parents on earth were his adoptive parents and that Xor is his birthplace. In fact, Lewis is actually a Shaper, and the only person who has the capabilities to save Xor from being destroyed by the Realm Pirates. Can Lewis tap into his powerful Shaper skills in time and fulfill his destiny? 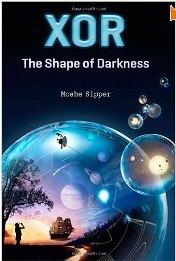 What an adventure! Boys in particular will just love this blend of fantasy and sci-fi, mixed up with snippets of real science and technology. Author Moshe Sipper has successfully created a fascinating parallel world in Xor that echoes much of Earth, but sometimes improves on things. It’s a race against time as Lewis, with a bunch of helpers (including a magician) search for the sorceress Dalith the Beneficent who can help Lewis save Xor. However, it’s not just about magic and molecules. Lewis must rise to the occasion and find his role in life. Part of the monumental task facing him is finding his inner self, and discovering the meaning of love and compassion. He also wrestles with concepts such as physical freedom, slavery, and freedom of choice as he meets various unusual characters on Xor. I think the author has very cleverly threaded some important coming-of-age themes into this tale of adventure and bravery. A wonderful ending hints at more adventures. Recommended. 4 Stars
Age Group: Middle grade


First reviewed for Readers' Favorite
Posted by Fiona Ingram at 1:09 AM 5 comments: