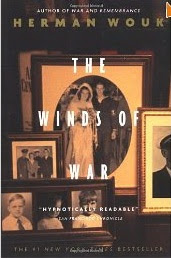 These human conflicts are somehow always uppermost in a story that never succumbs to the weightier issues of war and destruction. I enjoyed the way in which the author deftly creates an intimate viewpoint of the three pivotal characters of the war: Franklin D. Roosevelt, Winston Churchill, and Hitler himself by having Pug Henry at different stages of the novel actually meet and interact with these men. Another interesting angle is Pug's analysis of General Armin van Roon's (fictional) account of the war and the motives and machinations behind Hitler's various invasions and instances of both brilliance and bungling ineptitude. The author also provides a perceptive analysis of the psyche of the nations dragged into the war, and this is a great help in understanding how and why so many people entered into and supported their leaders in what could only be the greatest folly of the century. The book cannot, of course, adequately describe the unspeakable horror of the bombings, the dreadful atrocities perpetrated in the death camps, and many more occasions of wholesale slaughter, but the author does an excellent job of describing these events without sinking into a mire of sentimentality or a ghoulish litany. The book ends as Pearl Harbour is bombed, thus bringing the USA into a war that FD had successfully avoided in an effort to appease the war-shy American public. The bombing of Pearl Harbour, a momentous blunder on the part of Japan propelled the American giant into the war with a unanimous vote (bar one). This is a truly satisfying experience for the readers who want to sink their literary teeth into something solid!
Posted by Fiona Ingram at 1:53 AM 1 comment: