Chronicles of the Stone 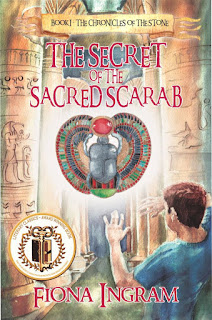 The Secret of the Sacred Scarab was inspired by a trip I took to Egypt with my Mom and my two nephews, then aged 10 and 12. We had an amazing time exploring this wonderful, ancient culture. When I came back I thought a short story with my young relatives as the heroes would be a unique memory of an amazing trip. I also put myself in as the boys' aunt and my mother in as their intrepid adventure-loving Gran. Many of the characters and events in the book were inspired by people we met and our experiences in Egypt. Six months later I was hard at work in the first book and had already planned an entire series. If you love history, geography, action, adventure, archaeology and a story that grips you from page one (plus lots of danger!) then this is the book for you. This will also appeal to anyone who wants to save the world or (for those readers a little older) remembers their plans to do so!


A thrilling adventure for two young boys, whose fun trip to Egypt turns into a dangerously exciting quest to uncover an ancient and mysterious secret.

A 5000-year-old mystery comes to life when a scruffy peddler gives Adam and Justin Sinclair an old Egyptian scarab on their very first day in Egypt. Only when the evil Dr. Faisal Khalid shows a particular interest in the cousins and their scarab, do the boys realise they are in terrible danger. Dr. Khalid wants the relic at all costs. Justin and Adam embark upon the adventure of a lifetime, taking them down the Nile and across the harsh desert in their search for the legendary tomb of the Scarab King, an ancient Egyptian ruler. They are plunged into a whirlpool of hazardous and mysterious events when Dr. Khalid kidnaps them. They survive terrifying dangers in a hostile environment (such as a giant cobra, as well as sinking sand), pursued by enemies in their quest to solve the secret of the sacred scarab. They must translate the hieroglyphic clues on the underside of the scarab, as well as rescue the missing archaeologist James Kinnaird, and their friend, the Egyptologist Ebrahim Faza, before time runs out. They must also learn more about the ancient Seven Stones of Power and the mysterious Shemsu-Hor. With just their wits, courage, and each other, the boys manage to survive … only to find that the end of one journey is the beginning of another!


About the Author: Fiona Ingram (B.A., Hons. (Natal), M.A., (Wits)) was born and educated in South Africa, and has worked as a full-time journalist and editor. Her interest in ancient history, mystery, and legends, and her enjoyment of travel has resulted in The Secret of the Sacred Scarab, the first in her exciting children’s adventure series—Chronicles of the Stone. Contact Fiona Ingram by email if you would like to review any books in the series.


The Search for the Stone of Excalibur 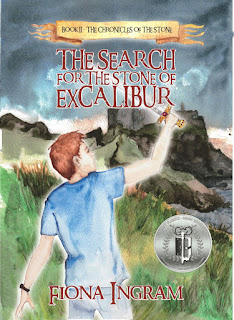 A thrilling adventure for two young boys, whose holiday in Scotland turns into a dangerously exciting quest to uncover an ancient and mysterious secret, leading them to ancient Britain, King Arthur and the Dark Ages.

Continuing the adventure that began in Egypt a few months prior in The Secret of the Sacred Scarab, cousins Adam and Justin Sinclair are hot on the trail of the second Stone of Power, one of seven ancient stones lost centuries ago. This stone might be embedded in the hilt of a newly discovered sword that archaeologists believe belonged to King Arthur: Excalibur.

However, their long-standing enemy, Dr. Khalid, is following them as they travel to Scotland to investigate an old castle. Little do they know there is another deadly force, the Eaters of Poison, who have their own mission to complete. Time is running out as the confluence of the planets draws closer. Can Justin and Adam find the second Stone of Power and survive? And why did Aunt Isabel send a girl with them?
﻿

Join Justin and Adam as they search not only for the second Stone of Power, but also for the Scroll of the Ancients, a mysterious document that holds important clues to the Seven Stones of Power. As their adventure unfolds, they learn many things and face dangers that make even their perils in Egypt look tame. And how annoying for them that their tag-along companion, Kim, seems to have such good ideas when they are stumped.


COMING NEXT! The Temple of the Crystal Timekeeper