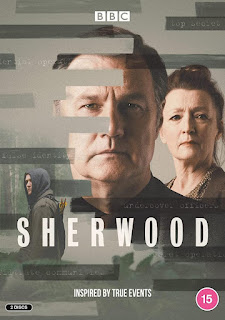 I was initially put off watching Sherwood because I read a couple of iffy reviews. However, upon looking at the cast list, I decided to give it a go. It was well worth it but perhaps not for the reasons the producers would have wanted. Let’s start with the cast. You can’t go wrong with a stellar cast that includes David Morrissey, Robert Glenister, the ever-watchable Lesley Manville, Joanne Froggatt, Claire Rushbrook, Claire Holman, Philip Jackson (was there ever a better Inspector Japp?), the ever-lovely Lindsay Duncan, Kevin Doyle, Alun Armstrong, Adeel Akhtar, and many other familiar faces. Their performances were so true to life, as one would expect from these acting stalwarts.

The plot (inspired by true events) was something else. Sherwood, Nottinghamshire, a forest, one almost expects Robin Hood to appear. He does not but a bow-wielding killer does and someone with links to the past, the old miners’ strike of the 80s, is murdered in the wee hours. Said bowman then proceeds to terrorise a few people who seemingly don’t have any links to each other, or do they? It doesn’t take long for the police to get a DNA sample and the identity of the killer, which fractures a community already riven by old grievances over the scab labour and the ensuing police and miners battle in the past. Information comes to the surface about a police informant planted in the village to foment trouble who never left but stayed and created a new life for themselves. Are the killings related to someone searching for the identity of this person, who caused a lot of trouble. Ultimately the killer’s real motive was rather weak, not related to this dark secret, and left the ending quite flat.

However, the strength and utter beauty, if one can call it that, lies in the performances and the character portrayals. These are so riveting that you sit on the edge of your seat, you cry with them, bite your nails with them, and wonder how their story will end. I have to mention Adeel Akhtar who most superbly plays Andy Fisher, a train driver and train enthusiast. He had lost his wife to suicide, and his only son just got married. In a terrible moment of anger and despair, he kills his sharp-tongued new daughter-in-law by accident, and from that moment on his tragic life unravels at an alarming rate. Adeel deserves an award for his rendition of Andy, a man ripped apart by grief, guilt, shame, and anguish. He had me in tears! I defy anyone to remain dry-eyed as you watch this superb performance.

Performance value is high, as one would expect from a BBC production. There is nothing skimpy about any aspect. Audiences of a certain age will remember the Thatcher years and how the unions were dealt with. For those new to this part of history, the flashbacks are well done and incorporate actual news footage. Looking back on it now, a 21st century audience might wonder what all the fuss was about, and people could work if they wanted to. But it was not so simple back then. The series lays out the drama of those times very well and the fractured relationships people had in this little ‘once a mining village.’ This element also gives impetus to the healing that can come after a tragedy if people are willing to take a step towards reconciliation. In that respect, the plot threads come together, making this an eminently watchable series. I will certainly be on the lookout for season 2. Don’t miss this one.

Posted by Fiona Ingram at 6:21 AM No comments: 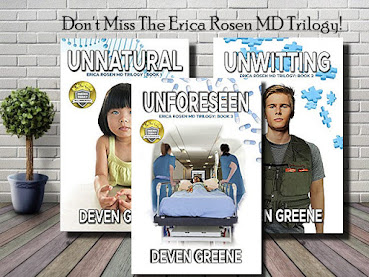 Book 1 Unnatural: Dr. Erica Rosen is perplexed when she sees a young Chinese girl with blue eyes in her San Francisco pediatrics clinic. The girl’s mother, Ting, is secretive, and Erica suspects she has entered the country illegally. Later, Erica encounters Ting’s son and discovers he has an unusual mutation. Erica learns that Ting’s children underwent embryonic stem cell gene editing as part of a secret Chinese government-run program.

Book 2 Unwitting: Dr. Erica Rosen’s world is turned upside down after a suicide bomber explodes amidst a large crowd entering Oracle Park baseball stadium, near her San Francisco home. Many are killed or injured, and police have no leads in solving the case. Erica becomes involved after a teacher of young autistic men contacts her. The teacher believes her students are involved in the bombing but is afraid to contact law enforcement. She reaches out to Erica, who has experience with special needs children.

Book 3 Unforeseen: Pediatrician Erica Rosen is stymied when two of her patients don’t respond to medicine as expected. When other patients later develop strange, unexpected illnesses, she is determined to get to the bottom of it. Meanwhile, the department’s newest pediatrician, Dr. Nilsen, appears to be trying to steal her patients. Erica suspects he is after her job as the clinic director. She also discovers Dr. Nilsen has become romantically involved with her trusted assistant, Martha. One evening, while looking for patient information on Martha’s desk, Erica comes across a list with the names of some of her patients. A boy who recently became ill with a mysterious malady is on the list and has an asterisk by his name. What does that mean?

Fiction writer Deven Greene lives in the San Francisco Bay area. Ever since childhood, Deven has been interested in science.  After receiving a doctorate in biochemistry, she went to medical school and trained as a pathologist. She worked for several decades in that field before starting to write fiction. Deven incorporates elements of medicine or science in most of her writing. She has published several short stories. Her debut novel, Unnatural, is the first book of the Erica Rosen MD Trilogy, and was released in January 2021. Unwitting, released in October 2021, is the second Erica Rosen MD novel. Unforeseen is the final book in the Trilogy. Visit her website at www.devengreene.com or connect with her on Twitter and Instagram.

Posted by Fiona Ingram at 7:55 AM No comments: 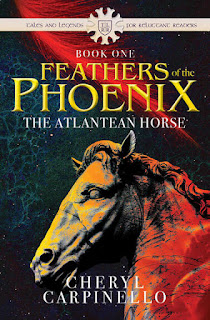 The Task: Retrieve the Five Feathers of the Phoenix to raise Atlantis so its people can return home.

The Chosen: Cousins Rosa & Jerome embark upon a perilous and personal quest to retrieve the first Feather. Rosa’s special gift, kept far in the Past, will be revealed, and Jerome will discover his.

The Opponents: The Four Deadly Horsemen of the Apocalypse will stop at nothing, not even murder, to possess the Feathers.

Join Rosa & Jerome as they risk all in their search for the First Feather!

My review of The Atlantean Horse: I’m a huge fan of anything to do with Atlantis. Just say the word and I’m there. Having read the start of Rosa’s adventures in Sons of the Sphinx, I was also keen to see where her gift had taken her. I was not disappointed. Author Cheryl Carpinello sets the scene right away with a mysterious, yet familiar stranger who appears to tell Rosa she is needed again. This is a special and possibly perilous mission that just happens to coincide with Rosa and her cousin Jerome’s family visit to a small, out of the way (can you even find it on the map?) island called Kalymnos in the Mediterranean, near Greece. From the moment they arrive and their mission is revealed – to find the first of the Five Feathers of the Phoenix – danger and a deadly enemy stalk them. I won’t give too much away but suffice to say there is enough action, adventure, intrigue, mystery, history, mythology, and legends to please young (and young at heart readers) who find the ancient world and its stories fascinating. The story arc is complete but refers to the next adventure in store. After all, there are five feathers so one down, four more to go!

Cheryl Carpinello does not dumb down the writing for middle grade and young adult readers, and parents (who might also enjoy dipping into the book) will appreciate a high level of complexity and vocabulary to keep readers on their toes and learning new words as they embark on this adventure with Rosa and Jerome. There is enough fresh information to delight readers who already enjoy history and mythology and to encourage readers new to the series to read further. The author refers to Rosa’s previous adventure a few times so, to put everything into context, I’d recommend reading Sons of the Sphinx as well to catch up on Rosa’s gift. The book includes end notes on mythology, Atlantis, biblical lore, and the actual islands of Kalymnos and Telendos mentioned. This book would be a great addition to any history class to encourage young readers to enjoy reading more about the past and learning from it. 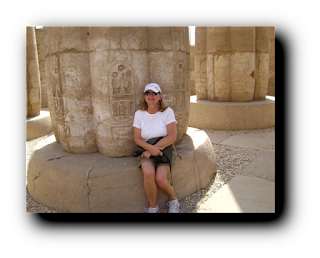 About the Author: I'm a lover of mythology, myths, legends, and tales from the ancient/medieval worlds. I enjoy exploring how these have transcended time/space to influence our world today. Myths and legends don't fade away; they are just repackaged for a new audience. As a high school English teacher, I continually challenged my students to find connections between today and times long gone by. Some took more digging than others, but the connections were always there. One of my favorites, Star Wars, borrows several concepts from the Legend of King Arthur. The Star Trek series goes even further back into the mythology of ancient Greece, Rome, and Egypt as well as others. I write Arthurian Legend for young readers and teens (I never refuse to let mature readers enjoy my stories!). These stories exhibit what I consider to be cornerstones of that Legend: Courage, Honor, Loyalty, and Friendship. My tales from Egypt and my new series Feathers of the Phoenix meld the ancient/medieval worlds with today. The Atlantean Horse (Book 1 of Feathers of the Phoenix) also brings the Four Horsemen of the Apocalypse out of the Bible and into the modern world. They and my main characters are after the feathers of the Phoenix in order to bring Atlantis alive again. P.S. I believe in magic and Unicorns!!