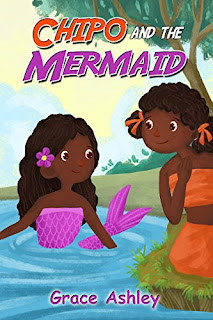 
I loved the illustrations that are simple, bold, and beautiful and perfectly depict the setting and the characters. The bright, vibrant colours will attract and keep young readers’ attention, and they will also enjoy picking out the other visual elements that enhance the story. This is a Cinderella style story with a difference and one that both teaches and entertains. It’s the kind of book that can lead to great further discussion between an adult or teacher and young readers, with many points to ponder as well as sparking youngsters’ curiosity to learn more about Africa, the culture, and the animals. I would recommend this to parents, teachers, and caregivers for that “something different” to pique young readers’ interest.
Posted by Fiona Ingram at 6:50 AM No comments: 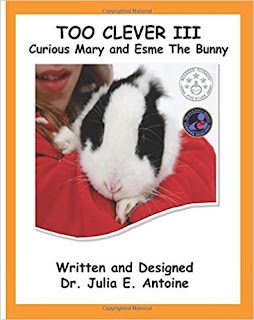 Curious Mary and Esme the Bunny by Dr. Julia E. Antoine is the third book in the very entertaining Too Clever book series for youngsters. This story revolves around a young girl called Mary whom readers will have met in Too Clever book 1. Mary is a curious young girl and thus earned the nickname ‘Curious Mary.’ Ten-year-old Mary lives on the tiny island of St. Lucia, one of the Caribbean islands. Mary lives in the city with all its modern conveniences that most of us take for granted. However, she just loves visiting her aunt and uncle’s farm in the country where life is simpler, albeit a lot less comfortable – no telephones, electricity, or running water. But Mary doesn’t mind; she enjoys the outdoors, nature, and the many varieties of flowers growing there. She enjoys spending time with Aunt Edna, Uncle Nathan, and her two cousins, Timothy and Aaron. Life on the farm is never boring because there is always something to do. Besides, Mary has a special little friend on the farm. A bunny called Esme, named after Mary’s best friend who had moved away. But Mary learns of a terrible fate in store for Esme on Easter Sunday! What can Mary do to save her best friend from being dinner on that day? Animal lovers will endure some nail biting moments as Mary racks her brains to come up with a plan to save Esme.

I really enjoyed learning about the island, and this is a wonderful way for teachers and parents to get kids interested in the geography, culture, the types of plants and fruits on the island, and a life style that will be quite novel to them. Youngsters will also enjoy reading about someone their own age that lives in another country. The author manages to include such a wealth of interesting details with facts that just slip so naturally into the narrative. The photographs are beautiful and show a positively paradisiacal countryside filled with the most beautiful flowers, as well as images from the village and surroundings. Young readers will also learn about a lifestyle that involves hard work by the family members. Chores on the farm take up a lot of time, but everyone pitches in.


Life on a farm is very different to life in the city, where we go off to the supermarket and more than likely never think of how food is grown or produced. On a farm, animals are generally raised for eating, which Mary learns, to her horror, from her older cousin Timothy. Young readers will enjoy reading about life on a farm. There are good discussion points in the narrative that teachers and parents can use to get young readers thinking. These include the differences between city and country life: how one can survive without gadgets and mod cons and become self sufficient on a farm. So many lovely themes are covered in this enchanting story - going that extra mile for a friend, thinking of solutions to a pressing problem, trusting in people, trusting in God to help one find an answer when there seems to be none, as well as enjoying the simple pleasures that many times we forget about in the hustle and bustle of modern life. Young readers will adore the photos of the farm and the animals, and Esme’s ‘pawtrait’ of herself in a blue ribbon is just adorable.