Review: The Musketeers is a "Must-See!" 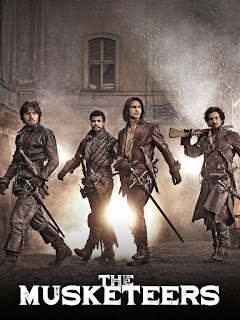 It’s not often that I feel inspired to review movies or a series. However, The Musketeers is what you’d call a ‘must-watch’ series. I hesitated before picking this up. I mean, how many versions have already been done of Dumas’ story? But something said, go on, have a look. Well, I was riveted. First, the series is perfectly cast. I cannot imagine any other actors playing the roles that these performers filled. The costumes are perfect, the settings beautiful (even the grotty streets with mud, mud, and more mud), the action is real, and thankfully the fights are perfectly timed and do not go on so long that you’re mentally saying, “For pity’s sake, kill him already!”
The episodes pay homage to the original story, but veer off into great little side plots. Yes, you know that at the end of each episode things will be resolved in favour of the musketeers, but that’s fine, that’s good, and there’s none of this new trend of producers to lure viewers into loving and rooting for a character, only to have him/her killed off in a nasty “take that, suckers!” kind of attitude. In fact, the very lack of vicious, gratuitous violence, abusive kinds of sex, and needless nudity that sadly seems to be popular with a famous series (no names here) is part of the reason why I stuck with and so enjoyed this series. Everything that happened was meaningful, within context, and played a part in the overall story arc.
For once, I want to mention the villains more than the heroes. Possibly because I have stopped watching The Walking Dead because for some reason the producers or the scriptwriters have turned a fine actor like Jeffrey Dean Morgan into a leering “Mwahahaha” villain with the depth of a puddle and little or no intrigue or back story to make one want to watch further. The Musketeers’ villains are just wonderful. From the coldly calculating and Machiavellian Richelieu (superbly and intelligently played by Peter Capaldi) to the psychotically cruel but lovelorn Comte de Rochefort (a brilliant Marc Warren) to the horribly creepy and plotting Marquis de Feron (also brilliantly played by an almost unrecognisable Rupert Everett) to Milady, whose love for her husband was destroyed. These villains all have some redeeming quality – hard to find in some cases, but it’s there. Richelieu loves France; Rochefort loves the queen; Feron discovers that he is, in fact, loved and accepted by Louis, and that changes everything. A villain must have depth for viewers to want to keep watching. Milady is a study in complexity and far from the surface villainess one might initially label her.
Another character I thought really warrants mentioning is Louis himself, and how actor Ryan Gage chose to portray him. It’s hard to give life to someone who comes across as capricious, shallow, vain, and self centred. But Ryan Gage managed to imbue the character of Louis with a certain childlike charm, a naiveté, and even an innocence, sheltered as he was from the realities of life. I thought the actor brought tremendous depth to a character who might have been dismissed as annoying but necessary.
Last but not least, take the time to watch the Extras on the DVDs. They are informative and very enjoyable. Sword fighting and horse riding is not as easy as these fine actors make it look.

Posted by Fiona Ingram at 5:09 AM No comments: