MG Book Review: Ronin Cleans His Room Like a Ninja 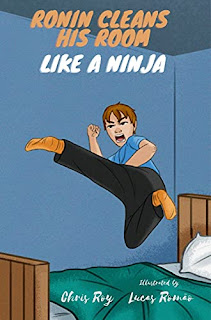 When Ronin’s parents go on what is possibly a well-deserved cruise, Uncle Max comes to stay to take care of Ronin, their son. Uncle Max is a pretty cool guy who gets ideas across without nagging or sounding boring. Ronin doesn’t like cleaning his room, putting his things away, eating dinner when he is told to, taking a bath when he doesn’t feel like it, and lots of other annoying stuff. Ronin can’t wait to grow up so people would stop telling him what to do. Ronin decides he is going to become a ninja, but he has no idea what is involved. Uncle Max does, though, and he very cleverly teaches Ronin what a ninja needs to understand and weaves some significant life lessons into the story. This has an incredible impact on Ronin and suddenly everything falls into place.

What a great way to teach kids the basics of life such as responsibility, determination, respect, and maturity using a concept that kids will relate to and enjoy. Ninjas need to know how to conduct themselves properly if they want to be a true ninja. The best way to get a kid to do something is help him want to do it because he enjoys it. Ronin finds that with the ninja concepts firmly in his mind, he cleans his room, does his homework, and makes decisions for the better.

Author Chris Roy understands kids. He presents Ronin Cleans His Room Like a Ninja in short, quick sentences, much like ninja moves I guess, and there is no preaching or pontificating about the right thing to do. The message is cleverly woven into Ronin’s aim to become the best ninja. The book works very well visually with illustrations by artist Lucas Romão. I also liked the page layout with one side being images of Ronin’s eloquent expressions/actions and Uncle Max and the other being the text laid over various images of Ronin’s room. The colour palette will appeal to boys as well with vibrant shades of blue.

Parents will be delighted to purchase this book for their child who maybe has issues cleaning their room or generally tidying up. Kids will admire Ronin’s aim and hopefully come to realise that “Cleaning like a ninja is fun!” But it’s not just about cleaning up. The book cleverly highlights the important foundation stones of life and how one grows up to be a good, responsible person, and where one learns these lessons. Great fun for all young readers and highly recommended. You can find Chris on Twitter @ChrisRoyCrime. Five stars!

Posted by Fiona Ingram at 4:43 AM No comments:

The White Lotus is an American satirical comedy drama series. “The series details a week in the life of vacationers as they relax and rejuvenate in paradise. With each passing day, a darker complexity emerges in these picture-perfect travelers, the hotel's cheerful employees and the idyllic locale itself.” (Wikipedia)

When I saw the series image, I naively thought this was a charming, somewhat different take on The Best Marigold Hotel with stories of the antics of quirky guests but this time in a Hawaiian setting. I was wrong. To say this is satirical comedy misses the mark. This is deep, dark, biting satire with characters that you will absolutely hate but cannot stop watching.

The opening scene of a coffin being loaded onto a plane and a character, newly wed, saying that his wife had died, intrigued me. Aha, murder mystery? Sort of. The lives and loves and loathings of several people/families intertwine in the most horrible way. I say horrible because these characters are so realistic that often you want to jump through the TV screen and punch someone’s lights out. The wokery and hypocritical piety of the socially conscious rich are shredded and ridiculed. You cannot believe that people actually espouse this nonsense, but then you realise that they do. I don’t think anyone has any redeeming qualities, apart from one or two characters who are genuinely nice. The characters on the whole are shallow, narcissistic, self-centered and materialistic, which is sadly what many people are like.

But the series is utterly brilliant in the way it savages social hypocrisy. The actors are absolutely riveting in how they portray these awful characters. Familiar faces include Steve Zahn, Jennifer Coolidge (who is utterly hysterical and always watchable), and Connie Britton. I have to mention Aussie actor Murray Bartlett who is superb as the ‘fallen off the wagon’ hotel manager as he surrenders to his vices. He is, in a word, magnificent. Much as I loathed the characters, I found myself turning into an ambulance chaser. I could not stop watching them. I had to know whose body was in the box marked ‘Human Remains’ from episode one. You’ll never guess. I thought I knew. I was wrong.

The photography is outstanding, absolutely beautiful. The music score is fantastic with a mix of old and new, modern and classical scores. Do yourself a favour and see it. Grin and bear it because the very clever script writers get the message across, and the ending has a moving epiphany for the most unlikely character. A five-star series.

Posted by Fiona Ingram at 5:48 AM No comments: