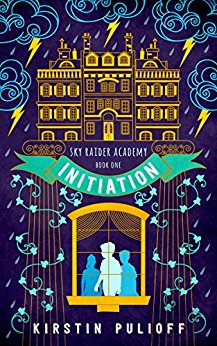 Life just couldn’t get any worse for 11-year-old Tommy. After the death of his father, he and his mom move from New York to Colorado, and (even worse) they’ll be staying with Tommy’s eccentric Uncle Joe, who owns a llama farm, and is (adding to the even worse part) a conspiracy theorist and something of a joke to the townsfolk. His new school is called Mustang Mountain Elementary and Tommy’s convinced, especially after a rocky start, that he’ll never be happy there. The teachers are also a bit eccentric, albeit in an interesting way, and the school bully has homed in on him from day one. Life sucks! But then life changes in (literally) a flash of light as a mysterious stranger, Mr. Bellarium, appears to Tommy one night and whisks him away to a very different kind of school, one in the sky called The Sky Raider Academy. This is where specially chosen kids learn how to manage the weather. Tommy’s father was a Sky Raider, and considered to be one of their most gifted and inventive students. Tommy’s problems with fitting into a new town, a new school, and dealing with new people fade into insignificance when it becomes apparent that a rogue Sky Raider is wreaking havoc on the world by manipulating the weather ... with disastrous consequences! Can Tommy, with his new Sky Raider friends, Will and Rachel, find the courage to combat this enemy and emerge victorious, and how much did this rogue Sky Raider have to do with Tommy’s father’s mysterious death?


First up, kids who aren’t even vaguely interested in science and meteorological phenomena will be riveted by how the author has turned science into magic. After all, “magic is just misunderstood technology.” There aren’t any magic wands, but there’s a plethora of gadgets, gizmos, rides, and novel pieces of equipment to delight any kid who loves to tinker with “stuff.” There is danger, excitement, and feats of derring-do aplenty. In between all the otherworldly Sky Raider activities, Tommy fits in a normal day’s school every day.  The author shines here in making real the dialogue, the problems, the events, and the interactions normal kids would have. As Tommy realises the world is bigger than he is, he starts noticing more about others; for example, his mom seems happier here on the farm now. It’s easy to turn inward and feel sorry for oneself, but Tommy rises to the occasion, especially the one that demands a final act of heroism.


There’s a large cast, but young readers won’t get confused because teachers (both at school and the Academy), family members (including Pinky the llama that eats almost anything), and friends are well defined and stand out as individuals. Hopefully, there’ll be more on them in subsequent books. I found the setting up a little slow, but considering this is to be a series, the information will serve young readers well. As an adult, I also found the meteorological and scientific details a bit too much, but looking at this book from a young reader’s point of view, I am sure that won’t be a problem. Author Kirsten Pulioff’s middle grade book, Initiation, tackles issues that children have to deal with and often struggle to cope with adequately (death, bereavement, moving, leaving friends behind, new school, bullying), as well as infusing a real world with a parallel world of fantasy, adventure, heroism, and more. I enjoyed the moment where Tommy stands up to the school bully and, in a unique way, gives him a “taste of his own medicine.” This could be seen as a book for boys, but Rachel is a very appealing sidekick and girl readers will love her character. A good start to an exciting series!
Posted by Fiona Ingram at 6:09 AM No comments: