Zoe and Zak and the Ghost Leopard Blog Tour

Zoe and Zak are lost in exotic India, where gods and magic still exist. Before they can find their way home, they just have to do one little thing… …Save a mythical creature from an ancient evil that wants to rule the world. When Zoe Guire goes along on her mom’s business trip to India, things get very weird, very quickly. An elephant god speaks to her from the bottom of a swimming pool… She and her classmate Zak get locked in a trunk and shipped off to a strange city near the foothills of the Himalayas… and a crazy snake charmer tells them they’ve been chosen to protect a mythical creature called the Ghost Leopard from an ancient evil that wants to take over the world. As they travel deeper into the majestic mountains known as the Realm of the Gods, things get even weirder. If she and Zak want to make it back to their parents, they’re going to have to tap into powers they never knew existed. Because if they don’t, things will never be the same for any of us ever again.

My review:
When 11-year-old Zoe Guire arrives in India on a brief sojourn with her mom, she has no idea what is in store for her. She also has no idea that she possesses hidden powers. Upon their arrival, Zoe discovers (to her mild annoyance) that Zak Merril, a boy she knows from school, is also there with his dad, who is Zoe’s mom’s colleague. Events take a strange turn and both Zoe’s mom and Zak’s dad have to leave to sort out a few things. Ostensibly, Zak and Zoe will remain at the Delhi Grand Palace hotel under the supervision of a babysitter. But that’s not the way things happen at all. Within a short space of time, Zoe and Zak have encountered a definitely no-good character called Frank Berger, found an antique map, sneaked into Berger’s hotel room, hidden away in an old trunk, and then been transported to a strange place,  miles from their nice, safe hotel. Plunged into an adventure involving a talking elephant, unusual local characters, and lots of danger, thrills, and spills, Zoe and Zak must stay alive and protect a mythical creature called the Ghost Leopard. It doesn’t help that Zoe keeps having really scary dreams as well.


This is adventure with a capital ‘A’ and the kind that middle grade readers will love. Although the book does have a slow start, soon Zoe and Zak are neck-deep in sinister people, events, and possible Very Bad Outcomes. The author does a fine job of painting the picture of India, from the ambiance, to the people, to the various cultural references. This places the young reader slap bang in the new and sometimes fantastical environment. India is full of amazing legends and fantasy elements and the author has used these to great advantage. Zoe and Zak see the ‘real’ India that tourists don’t encounter, and this is absolutely one of the high points of the story. While there is sometimes too much information, and it can slow down the pace, I think young readers will breathe in the ambiance with relish. Fantasy merges with reality in the author’s capable hands with descriptions to take young readers as high as the magic carpet they encounter. Zak is as ‘supermega majorly’ annoying as any sixth-grade boy can be and he provides many chuckles with his clumsy efforts to manage things. Zoe is intense, thoughtful, and takes things more seriously. I enjoyed the balance between the two characters and kids will certainly relate to them. This is an action-packed, magical adventure with enough excitement and peril to keep young readers glued to the pages. This is the first of Zoe and Zak’s adventures so young fans can look forward to more fantastical events.

"Awesome! ~ I am 11 and I liked the book because I love adventures. It was a different kind of adventure from what I usually read and it was funny too. " ~ 5-Star Review from J. Olsen, Amazon
"This was a fun read. This book was like a kid's version of Indiana Jones. It's also very educational as Zoe tells you real facts about what she sees and the history. I enjoyed it immensely. If you have a 10-12 year old child that loves adventure books, this is definitely a must read. " ~ 5-Star review from Simone Lilly-Egerter, Amazon
"I'm sure this book was written for children who are around the age of the two children in the book, 11 or so. But, this 35 year old loved this book! It had action, adventure and imagination galore! It was exactly the kind of adventure that a lot of kids that age dream of." ~ 5-Star review from The Novice Christian, Amazon

About The Author: Lars Guignard

Prior to writing novels, Lars Guignard wrote for film and television. As a teenager he attended boarding school in the Indian Himalayas and his experiences there provided the inspiration for the Zoe and Zak series which now include: Zoe & Zak and the Ghost Leopard, Zoe & Zak and the Yogi’s Curse, and Zoe & Zak and the Tiger Temple. He lives in the Pacific Northwest where he dodges bears and cougars while hiking & skiing the magnificent Coast Mountain Range. For news about new releases, please join his email list here: http://www.larsguignard.com/contact/

Fantastic Press is pleased to announce that Lars Guignard will be answering questions about Zoe & Zak and the Ghost Leopard throughout the day on Monday, December 16th, 2013 on Goodreads. If you have any questions for Lars or just want to introduce yourself, you can head on over to Goodreads and say hello now. Also, everyone who joins the Forum will earn an entry into the Ghost Leopard Blog Tour giveaway (see below for more details).


Click on the Goodreads Button below to go to the Mon, Dec 16 - "Ask Lars Guignard about Zoe & Zak and the Ghost Leopard" event and leave a question for the author anytime from now until December 16th, 2013.

When I Grow Up, I Wanna Write a Kid's Book (Review)
November 25

We are the DinoFamily (Review)
Sher A. Hart: Written Art (Review)
November 28

The World of ContestPatti (Review)
November 29

Prize: Three winners will receive a print (U.S. & Canada) or electronic (international winners) copy of Ghost Leopard by Lars Guignard. Contest runs: November 15 to December 17, 11:59 pm, 2013 Open: Worldwide How to enter: Enter using the Rafflecopter widget below. Terms and Conditions: NO PURCHASE NECESSARY TO ENTER OR WIN. VOID WHERE PROHIBITED BY LAW. The winners will be randomly drawn through the Rafflecopter widget and will be contacted by email within 48 hours after the giveaway ends. The winners will then have 72 hours to respond. If a winner does not respond within 72 hours, a new draw will take place for a new winner. Odds of winning will vary depending on the number of eligible entries received. This contest is in no way sponsored, endorsed or administered by, or associated with Facebook. This giveaway is sponsored by the author Lars Guignard and Fantastic Press and is hosted and managed by Renee from Mother Daughter Book Reviews. If you have any additional questions - feel free to send and email to Renee(at)MotherDaughterBookReviews(dot)com. a Rafflecopter giveaway

Book Review: Arabella, the Moon and the Magic Mongongo Nut 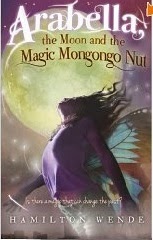 Arabella lives with her mom and dad in Parkview, Johannesburg, South Africa. She has a happy, stable life, with all the love anyone could imagine from her parents and (four!) grandparents. Her eleventh birthday is the turning point in her life. She receives some unusual gifts, which change Arabella’s life forever.  But then things go horribly wrong. Her dad dies, and life turns dark, bleak, and hopeless. Thanks to her unusual birthday gifts, Arabella discovers a magical world at the bottom of her garden and amazing things happen. She is able to speak to the animals there, and discovers she has a special role to play once she is given a magic Mongongo nut by Khanyi, the mealie lady. Suddenly, the ordinary becomes the extraordinary and Arabella and her new friends must battle against the evil hadedas, led by their nasty king, Ozymandias, who has a wicked plan. At the same time, Arabella finds hope in the Book of Echoes; hope that with this new-found magic, she can turn back the clock to the happy times before her dad died. Is the magic this strong? Can Arabella defeat the hadedas’ nefarious plans?

Although all young readers will love this charming book, young South African readers will particularly relish it. Familiar names, places, creatures, and cultural references will resonate with readers, bringing this adventure right into their own back gardens. Arabella faces enormous challenges, and the biggest one is within. As the use of magic changes her, perhaps bringing out selfish desires, she has to learn to do what is right. Acceptance of grief is very difficult for a young person, and this is one of Arabella’s saddest tests. Self-sacrifice, loyalty, the meaning of friendship, and doing the right thing are also highlighted as Arabella’s final choice will sway the outcome of the battle. Author Hamilton Wende has perfectly captured Arabella’s character, giving poignant insight into just how difficult life choices are at that age. The hadedas are brilliantly malevolent … but fun! Lovely atmospherics abound, painting the most incredible pictures for a young imagination to enjoy. The author has a real gift for scenarios and I am sure this book will linger in readers’ minds long after the last page has been read. I would suggest a glossary at the back for non South African readers to understand several local terms. I must mention the superb cover by Rob Foote which adds to the ethereal, magical quality of the book. Available on Amazon.