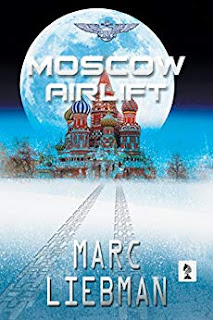 Although many people are probably unaware of this fact, by 1991 and for several reasons the Soviet Union had run out of grain. Faced with the threat of a starving population and mayhem, Gorbachev signed a deal with the USA, committing them to purchasing 8 million tons of grain over the next five years. World powers were then, and even more now, so finely balanced that the collapse of any country was not desirable. This one would send millions of starving Russian refugees fleeing to other countries. But the Soviets have more than just a food problem. Inflation rises, rumblings of dissent sound from within the ranks of the powers that be, and Gorbachev faces a coup. This is the perfect moment for Iran to illicitly obtain nuclear weapons. Seasoned Captain Josh Haman is sent by the US government to be their eyes and ears on the ground, and to submit accurate intel on the situation. But his impersonal attitude ends when he meets a KGB general who promises to give him the names and addresses of the man who ordered the killing of his first wife and her parents. Josh is torn between his military goals and the personal desire to exact revenge. Plus, he meets a former flame from the past! Adding to that is a radicalized mole in the FBI and a bomb threat in New York…


Besides being a political thriller to satisfy even the most exacting of fans, Moscow Airlift by Marc Liebman is fascinating reading on world affairs. Although the title is Moscow Airlift, and the operation is named Operation Deny Famine, the action starts in 1971, in war-torn Laos. It moves over the years between Russia, France, the USA, Iran, Israel, Lebanon, Azerbaijan, Turkmenistan, and Uzbekistan. The narrative is detailed, perhaps overly so for fans who like to race through the action, but is perfect for those readers who enjoy savoring facts and minutiae. The author’s style is somewhat reminiscent of Frederick Forsyth, John le Carré and Terry Hayes. I am a huge fan of Hayes’ and Forsythe’s work and I appreciated this element of Marc Liebman’s tale.


The action starts at a time and place and involving characters that seem unrelated to the main actor and his mission. But be patient. Liebman weaves an intricate web of espionage and treachery, covert action and duplicity. All the threads, sub plots, and seemingly disparate characters are drawn together inexorably. The narrative is detailed, informative and succinct, yet the story flows without dragging. Liebman keeps the reader intrigued and reading on by changing the various scenarios quickly and this creates tension and interest. The author’s extensive military experience shows through in the story and plot.

There are too many characters to bond deeply with each of them, but Josh is the most well developed and necessarily so as he is the pivot around which the action turns. Danielle is also a character that readers will care about. The others are well drawn within their roles. Despite being a complex story with much to keep track of, Moscow Airlift was a surprisingly easy read. The historical background on Moscow Airlift, found at the end of the book, is well worth reading in advance. I enjoy political thrillers and especially when facts are woven carefully into a thrilling plot, which is the case here. For fans of the genre, this is an excellent reading choice. 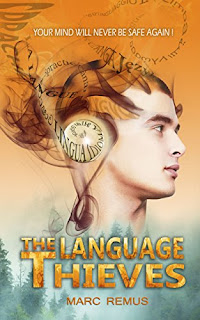 The Language Thieves is a young adult fantasy by Marc Remus. Sixteen-year-old Daniel is none too happy about his father’s decision to move the family from Arizona to a remote Scottish island, of all places. His mother was stricken by a mysterious illness that has rendered her incapable of communication. Daniel speaks English and Irish Gaelic although he isn’t too keen on overtly displaying his Irish roots. Once on the island, he meets two new friends, Jenny and Connor, who are as suspicious as he is about a strange, elusive tribe that inhabits a part of the island: the Cerebrals, with their own unique culture, obsession with language, and their worship of the brain. The Cerebrals keep themselves apart from the rest of the population, and don’t want their kids to have anything to do with the locals. A bit difficult when Daniel finds himself falling for the cute Emily, who just happens to be a Cerebral. What is the mystery behind the Cerebrals, and do they have anything to do with Daniel’s mom’s affliction? How can they possibly be dangerous?


This is a young adult fantasy that is quite different from the norm. The plot dives back into ancient history and draws together some very intriguing theories. Young adult fans of Atlantis and ancient civilizations will devour this story. The plot is full of twists and turns and although I am not usually surprised, this book made me sit up. The action starts right away, aboard the ferry en route the island, when a young teen is attacked by strange men. The pace is steady and escalates as the youngsters team up to resolve the mystery behind the Cerebrals, their mission, and how it will affect the whole world.


Daniel is the most well developed of the trio, but Jenny is a solid sidekick gifted with IT skills and Connor is close behind as the loyal friend willing to follow first and ask questions later. The teens sound and behave mostly as one would expect teens to do and this adds realism to the plot. The romance between Daniel and Emily is sweet but underplayed so that it does not overshadow the main plot. The intrigue and mystery behind what the kids discover will certainly have young readers doing their own investigations into history, culture, and the value and place of ancient languages in society. I liked this thought-provoking angle – just how many ancient languages are still spoken today, and how many have been lost in the last century? The descriptions of the Cerebrals and their culture, dress and architecture are unique and showcase the author’s incredible imagination. A great cover and good layout and editing add to one’s reading pleasure. Themes of friendship, loyalty, teamwork and family abound. This is an intriguing fantasy by Remus and perfect for the young adult market.
Posted by Fiona Ingram at 6:15 AM No comments: