A beautifully written story with fascinating characters, set in medieval England, and featuring characters of legend like the legendary King Arthur and Merlyn… 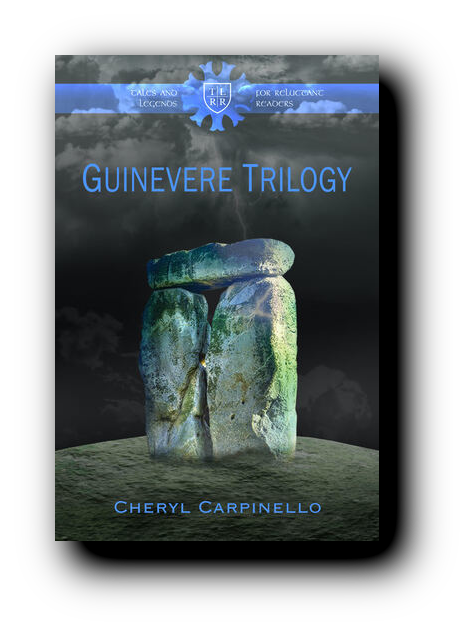 GUINEVERE: ON THE EVE OF LEGEND

Princess Guinevere dreaded her upcoming thirteenth birthday. It signaled the beginning of her official role as the Lady of her father’s castle.No more adventures in the forest with Cedwyn. No more explorations outside the castle walls. No more excitement. No more danger. No more fun.Cedwyn—her companion for as long as she remembered—viewed her circumstances differently.A Medieval coming-of-age story relevant today.

GUINEVERE: AT THE DAWN OF LEGEND

Ancient Stones. Mystical Stones. Autumnal Equinox.Down upon a wide plain the yellow orb shines strong.Racing side by side, the two laughingly ride.A mist descends. The laughing stops.A dangerous Medieval tale of two friends. Of a loyalty not often seen.

Fiercely loyal, Cedwyn always rushes to Guinevere’s defense. Stubborn to a fault. Always there for her. A future Knight? His one and only hope. A hero? Not what Cedwyn strove for, but it sought him.

Guinevere rarely thinks with her head. Just the opposite. Thinking with one’s heart: a recipe for trouble. And trouble finds Guinevere, all too often. Stubborn, she refuses to abandon those depending upon her. Even when ordered by her father, the king.

And so these two—both on the edge of Legend—barrel forth in this deadly dangerous and riveting Arthurian adventure.

Guinevere: The Legend is the concluding entry in the Guinevere trilogy by Cheryl Carpinello, a compelling Arthurian tale with strong characters and a story that explores the themes of friendship and loyalty against the backdrop of a society rocked by a crisis. The little children have been kidnapped, and Cedwyn is with them. Guinevere has made a vow to rescue Cedwyn and she leaves home without telling her father, an act that fills her with guilt. But she doesn’t know her bravery might put Cedwyn in harm’s way. She is just fifteen. And eleven-year-old Cedwyn trusts her absolutely, considering her as his queen. He is certain that she’s coming for him and the children. Can she save them from the renegades who hold the children captive? Traveling across the dark waters to the land beyond, Gaul, is perilous. In spite of the grim tales she’s heard from the old wizard Merlyn, will she continue?

This is a beautifully written story with fascinating characters, set in medieval England, and featuring characters of legend like the legendary King Arthur and Merlyn. In this novel, the author deftly develops a tale of adventure that revolves around Guinevere as a young girl and her loyalty to those she loves. The reader encounters her at the very start of the story, poised and on the go, determined to save her friend. Cedwyn is a richly developed young character as well and I enjoyed the way the author develops his friendship and devotion to the protagonist. The writing is filled with strong imagery, including elements of the setting like the rugged landscapes. The author’s unique ability to unveil the strong emotions of the characters and to keep the story realistic is a great addition to the strengths of the novel. The medieval era is reflected in the unique style of conversation and in the beliefs of the characters. Guinevere: The Legend is a gripping tale that keeps the reader turning the pages until the very last one…Reviewed by Christian Sia for Readers’ Favorite

As the final book in the trilogy, Guinevere: The Legend wraps up the story of Guinevere, her friendship with Cedwyn, and the various adventures they embark upon. This story picks up where the second left off: the abduction of the little ’uns by the renegades who have nefarious aims against Arthur. Cedwyn managed to go after the abducted children and has placed himself in grave danger. Guinevere in her usual impetuous manner wants to go after Cedwyn. Merlyn and Arthur (to whom Guinevere is now engaged) make up a small party of trustworthy knights who will cross to Gaul in search of the youngsters.

Cheryl Carpinello steeps middle grade readers in the era and the lore of Arthuriana. Small but telling details of the clothing, food, lifestyle, and mores included teach young readers as they enjoy this nail-biting adventure. And nail-biting it is too! The chapters are short, to keep a young reader’s attention, and the points of view switch with each one so that the reader is constantly engaged in the narrative. Will the renegades succeed? Will Arthur and Merlyn manage to rescue the kids and Cedwyn? Themes of loyalty, friendship, strength, courage under fire, standing up against bullies, doing the right thing and more help point the young audience’s moral compass north. There is a bitter-sweetness to the closing moments as Cedwyn and Guinevere realize that they are growing up and life is taking them in their appointed directions. Excellent questions at the end give parents and educators lots of material for starting discussions with young readers. Lovely black and white illustrations and a map enhance this book.

To get the best of this wonderful historically accurate series, I would advise reading from the first book.

Check out my book at Goodreads! 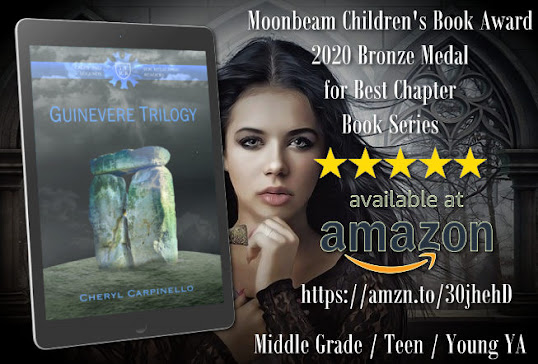 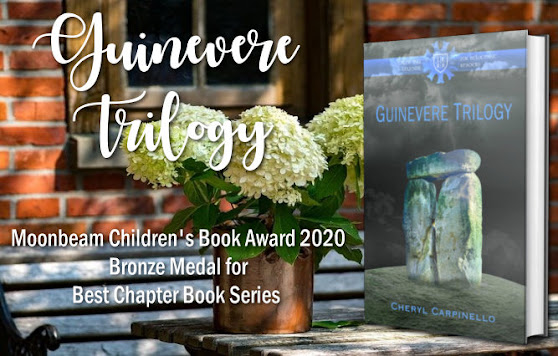 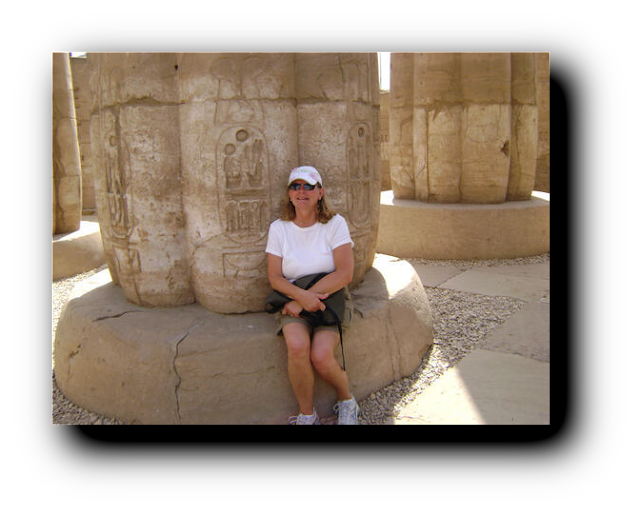 Cheryl Carpinello taught high school English for 25 years. During that time, she worked with numerous students who didn’t like to read for a variety of reasons. However, she discovered that even the most reluctant readers became engaged in the classroom and in reading when she introduced units on King Arthur and the works of ancient world writers. Upon retiring, she set out to write fast-paced, action-filled stories in these setting to encourage young readers to read more. When not writing, you can find her reading, spending time with family, and traveling.

Guinevere: On the Eve of Legend (1)

Guinevere: At the Dawn of Legend (2)

The King’s Ransom (Young Knights of the Round Table)

Sons of the Sphinx 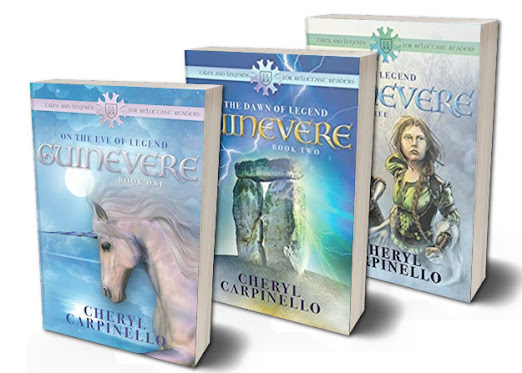 Movie Review: A Good 'B' Movie - The Cave While I am not usually a horror fan, something about The Cave piqued my interest. “In the 13th-century Carpathian Mountains of Romania, an Eastern Orthodox abbey and its inhabitants are destroyed by a landslide. Centuries later, a group of modern-day Soviet and British plunderers search for the long-lost abbey during the Cold War era. They discover the abbey is built above a vast cave system, but it is completely blocked off by an intricate floor mosaic. Trying to blast their way in, they cause a landslide that buries the abbey, trapping the men in the cavern below. They descend further into the cave in hopes of finding a way out, even as they hear strange sounds in the darkness. Some time later, present day, a new team, led by Dr. Nicolai, with his associate Dr. Kathryn Jennings and cameraman Alex Kim explore the site, and the mythology behind the winged demons depicted in the mosaic on the abbey's floor. Local biologists believe the cave could contain an undiscovered ecosystem, so they hire a group of American spelunkers led by brothers Jack and Tyler McAllister – thrill-seeking professional cave explorers who run a world-famous team of divers.” (Wikipedia)

Yes, this has all been done before but somehow this version brought a little freshness to a tired trope. Of course the Knights Templar are involved and they’re always good for an ancient mystery. Again, of course, the looters failed to grasp the significance of the mosaic, with images of skeletal winged demons with oddly human faces and very, very long teeth, and the reason the monks had sealed off the cave in the first place. The cast is also good, albeit since this was made in 2005, some had not achieved their fame of today: Lena Headey, Eddie Cibrian, and Morris Chestnut star. The pace is slow in parts which would be logical as they investigate this new ecosystem. However, the science part of this science fiction/horror flick does work in that there are ecosystems where creatures flourish in almost total darkness underwater.

Where the plot got lost is in having too many back and forth forays into various tunnels (above and under water) with people being attacked by the fearsome creatures. But that aside, the special effects are great, and the pace speeds up as the last remaining survivors have to get out. One of the crew members bitten by a creature starts to exhibit signs of turning, which adds to the rising suspense and tension. Schlocky it might be, but you will be sitting on the edge of your seat. The director saved the best for last in that when two of the remaining three survivors meet up, it becomes apparent that the parasite wishes to escape. A fantastic ending.

What a pity there has never been a sequel, but this was because (I surmise) it was considered a flop. The movie did not do well, garnering negative reviews and not making much over the original budget. But the photography is really brilliant and although critics slammed the lack of character development, this is an action horror movie. Does one really worry about character development if the cast is being chased by monsters bent on killing them? The movie worked for me. 4/5

Posted by Fiona Ingram at 8:42 AM No comments: