NaNoWriMo and Me Redux

Well, 30 November has been and gone and I completed NaNoWriMo. Yes—applause, applause— I did it. I finished off with a very healthy 51000+ word count, and I will be submitting the book—The Lady’s Revenge— to my romance publishers (gulp, yes I write historical romance for fun) MusaPublishing. This is the sixth novel I have written in the romance genre and it is a whole lot of fun. My romance pseudonym is Arabella Sheraton. You can find my Regency romance books on Amazon.


So, what did I learn from NaNoWriMo?
I learned how to write a lot in a short space of time and under constant pressure. The problem with authors is that there’s always time to fiddle about, tweaking a paragraph, rewriting a section, and changing words here and there. Often a whole day passes, with no real word count achieved. The pressure of NaNoWriMo soon clears that up!
My own style is linear, with deviations into the subplots. I often have whole scenes or else the ending written in my head, and I occasionally write a scene that is much later in my work. However, I usually progress at a steady pace, tying up the plot links as I go along. NaNoWriMo forces you to see the whole story in a big global picture. Well, if you want to keep track of where you’re going, that’s what I mean. I like to develop chapters by going back after a day or two, and fleshing them out. Not a chance here. With a word count pressing,one has to leave the cosmetic stuff until much later.


One might think that just over 1600 words a day is not difficult to achieve. No, it’s not, but how about the days when you just cannot write because pesky old life and responsibilities get in the way? I found a sense of drive developing in me, like an obsession. I had to get over the daily word count; I just had to! 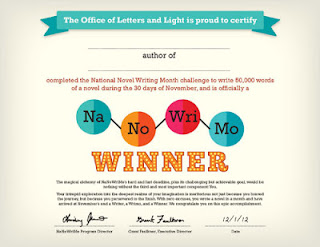 Then there is the ‘don’t edit’ rule. Impossible. I must edit as I go along. I would sneak back, under cover of darkness and edit what I had done that day. I could not bear the red and green lines, bleeping signals that my grammar and spelling looked horrendous in the flurry of flying fingers. Actually, my spelling is perfect; it’s my typing that isn’t.


I am a disciplined writer. Being a writer is like having permanent homework; you feel guilty if you are not pounding away at the keyboard. However, this was a different kind of discipline, or even pressure. There was a definite end date in sight. Many writers let the work dictate the finish time. Not so with NaNoWriMo.


I am reminded of lines from Andrew Marvell (metaphysical poet 1621-1678) in a poem entitled To His Coy Mistress:


“ ...But at my back I always hear
Time's winged chariot hurrying near…”


Kristen Lamb talks about discipline in her blog post entitled NaNoNowWHAT? Small Steps for BIG Change. She discusses how you don’t always get what you wish for: you get what you work for.


Becoming an Olympic champion requires more than just athletic prowess; it also depends on the ability to focus, mental toughness, drive, optimism and emotional control.
We could just as easily reword this statement:


I loved the NaNoWriMo experience and the sense of being part of a writing community is great. The total number of winning participants was 170294 worldwide; the combined word count was a staggering three million and some change. That’s something to be proud of!