Book Spotlight: Ignatius and the Swords of Nostaw by DA Mucci 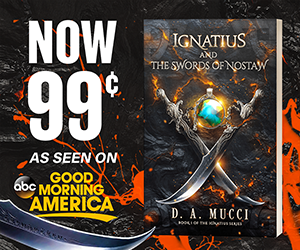 Is there anything worse than high school?

When a clever, peace-making verbal volley failed, and the guy pulled a switch blade, Iggy took off. A locket he wore warmed up. Suddenly, he wasn’t in Susquehanna, PA anymore. Before he could gather his wits…

…someone had tackled him.

Pinned on the ground, his assailant bade him, be quiet. Something was going on just up ahead. A horrifying-looking knight in black armor, and a strange looking creature were locked in battle.

No. And with its dying words…

…the warrior gave Iggy his swords.

★★★★★“D.A. Mucci does such a great job of creating a universe that is entirely fantastical yet believable and relatable. Ignatius and the Swords of Nostaw has an almost Harry Potter-ness to it in that we are guided into this world through the eyes of a character who is learning of it the same as the reader and who is a character very similar to its target audience. But, it is also entirely different in a good way. I have honestly not taken to a fantasy novel as much as this one in quite a long time. The author is an excellent storyteller and writer.” — Kate Leboff

★★★★★ “Right from the start this story is breathtaking in how much detailed surrounding the kingdom of Skye… a once luscious and beautiful place that had been filled with animals and people. Now it’s a kingdom with no beating heart. In desperate for a hero, a teen named Iggy finds himself becoming the hero these people need. Mastering a set of growing magic skills in a challenge but its mastering the skills in handling the towering secrets that are claiming Skye is something else altogether. A wondrous journey in a finely painted world. Highly recommended.”—Lori Goodreads review

★★★★★“The author managed to create quite intriguing magical world full of fantastic beasts, some of which are not what you typically expect from beasts – they are mighty warriors, living in seclusion, whose abilities in battles are legendary. The world building is really nice and takes your imagination to amazing places. Combine this with an awkward, introvert and insecure boy who gets swallowed into the greatest adventure of his life, one which is too big for him to understand at a time, but he grows and shows his worth and true power. Definitely recommend this book.”—Lia Goodreads review

The towering stone Castle Maol, the unrivaled seat of power in the Kingdom of Skye, sat inland almost bereft of life.

Once known for its inspirational beauty, Skye’s forests and meadows were more barren than green now, enveloped by stillness instead of bustling wildlife. Lakes and waterways once teeming with marine life lay stagnant. Most of those who lived here survived under gray clouds of despair.

Several of the eldest knew of the prophecy that would return the land to its prior golden age and quietly hoped it was true.

Only a handful knew the secret that would allow the prophecy to come true. They refused to speak of it. 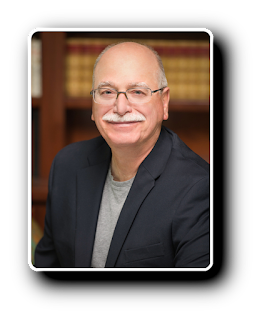 Months of self-induced isolation to protect loved ones from exposure to Covid-19 led Emergency Medicine Physician David Mucci to create a fantasy world as an outlet to manage pandemic stress and support his own mental health. The resulting novel, Ignatius and the Swords of Nostaw (St. Bart’s Publishing, October 2021), tells the tale of an impossible mission led by an unlikely hero.

This is the coming-of-age story of 15-year-old Ignatius, “Iggy”, who is thrown into a world of unknowns, transported to a medieval world filled with magic. Based on research of myths and legends, Mucci created The Kingdom of Skye, the setting for Iggy to develop special powers and accomplish quests to fight evildoers and find his way home.

According to Mucci, Iggy must learn to trust a diverse set of characters but also learn to believe in himself and grow; much like as a medical provider, Mucci had to trust himself, trust his colleagues and learn how to adapt during the pandemic.

The first in a planned 5-part series, Ignatius and the Swords of Nostaw is YA fantasy suitable for both teens and adults as it gently reminds readers that they are responsible for their own destiny, and that sometimes the most unexpected people can be the best teachers. At 67 years old, writing a YA Lit fantasy series, Mucci is also proving that there is no limit for being creative. “The only limitation is the one that you place on yourself and on your imagination,” says Mucci.