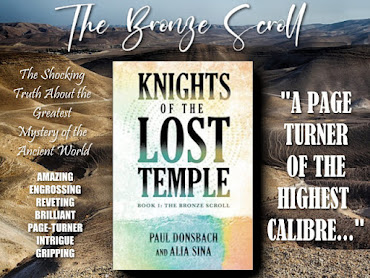 A New-Age Journey of Discovery: For their first novel in the Knights of the Lost Temple series, co-authors Paul and Alia chose the so-called Copper Scroll (which is actually made of bronze) as a central element in the characters’ story. One of the Dead Sea Scrolls found in a desert cave in the 1950s, this artifact is a treasure map listing tons of gold and silver hidden at vaguely described locations that scholars had given up on deciphering. As a supposedly “unsolvable” mystery, the Copper Scroll would serve a symbol of the discontents of modern life, in which the great, achievable dreams seem to have already been accomplished. There was just one problem. The Copper Scroll wasn’t unsolvable after all. As Sam and his friends work to decipher this ancient treasure map, its mysteries unravel one by one.

The authors of this new adventure-romance series invite you to join them on this voyage. Currently working on the second book in the series, the authors believe that the world’s diverse spiritual traditions hold answers for our troubled times. Paul, who identifies as “spiritual but not religious,” and Alia, a “new-age Muslim” from an Afghan American family (writing under her pen name), believe that greater understanding among the world’s different faiths and beliefs is essential to solving the world’s current problems. Recognizing that even the smallest miracles—like an ancient treasure map found in a desert cave—can make a big difference, the authors welcome you to share this journey together.

My review: This is a slow-burn adventure which unfolds gradually, given the massive back history of the ancient world and the scroll itself. The authors mix history (biblical and ancient), geography, travel, suspense, villainy, and thrills to engage the reader with Sam and his quest. If you’re looking for the rollercoaster non-stop action and pace of Indiana Jones or Dan Brown, you will not find it here. There are many links and threads from the past that must be woven carefully into the present day to give meaning to the quest.

Sam is a thoughtful and spiritual protagonist who doesn’t actually understand his dreams and visions, especially those of people from the past who offer him advice and valuable pointers in his quest. The reader gets to know Sam, his dreams, and his desires intimately and thus has a deeper understanding of who he is and what the future has in store for him. There are many surprises waiting around the corner, it seems, as he learns more about his family and their history too.

If I have any criticism, it is that the factual information is really dense and could be spread out for an easier reading flow. In addition, while many historical details are very necessary for the plot to make sense, the extra details on just about every site of interest or antiquity were unnecessary and slowed the pace down. Facts not germane to the plot could be put in a glossary at the end for the interested reader to learn more. That said, the action really picks up in the last part of the story where there are big reveals, big betrayals, and lots of thrills in a life-and-death race against time. The end is astonishing as well and segues nicely into the next leg of Sam’s adventure while still wrapping up this mystery quite neatly. The book is well written and well edited. History buffs and fans of archaeological mysteries will appreciate the depth of the research and enjoy this book. 4/5