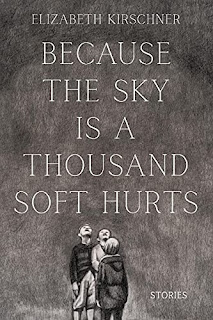 Elizabeth Kirschner is the author of Because the Sky is a Thousand Soft Hurts, a “blend of poetry, prose, memoir, and master storytelling.” This is her debut collection of short stories. Elizabeth shares with us below her obsession with language.

"My obsession with language came over me, almost like a demonic possession. I was only nineteen when I first took a Poetry Writing Workshop. I assumed poems were written by dead people for other dead people. I was that astoundingly ignorant, that blessedly naive. Within three weeks, I decided I would become a poet. I was utterly stricken by the power of language, its sheer audacity and nearly unmentionable ability to express what hitherto was inexpressible. Windows opened in the cave of my brain. My mentor was Southern. The way she said words like “chinaberry” or foxglove” lent them a physicality I didn’t know language could embody. Words became mouthy for me, something to tongue, loll around.

Poetry is a language-driven construct. It demands an almost unbearably close examination of each and every word, which is akin to a hair dragged across the eye. Painful, even excruciating. The language in any given poem must be visceral, forcefully urgent, it must bear its own weight. At best, every word will work double or triple time, that is, take on nuance, substance, meaning via such devices as metaphor and simile. I loved this. The way a pairing of words, the just-so-ness of them, could transport them into another, more singular meaning, or apprehension. The poem does its work by apprehension, that is, as readers we apprehend meaning, the hint and scent of it, the taste even by what the words are working exceptionally hard to intuit, express.

My formal education was in the writing of poetry. Which meant I was inordinately in love with the language. I still am, as it is any writer’s essential instrument. When it comes to writing short stories, I’m not sure whether my obsession with language is a curse, or my most powerful device. I do know that constructing any given sentence can be crippling. If the first sentence isn’t load bearing, if doesn’t provide a scaffolding or stepping-stone into the next one, I revise. The sentence is structural. It must be tensile, strong, flexible. It must also have a voice.

The stuff with which we write is a construct of language, first and foremost. Characters cannot speak unless the writer puts words in their mouths. Nor can characters exist without a physical landscape, a physical description. Here’s an example from one of my stories, JONES BEACH.

“It should not follow but it does; my brother is here; in the brief strenuousness, in a house like a cowl on the head. Rain falls, is a wall of birds, which wall off the bird heavy sky while the season stretches out of shape.

“Well?” I ask, my voice, a song with hinges. In the darkest sweater I own I’m cold.

“Spoons,” he replies. The dead bark once. We take one another’s hands, lift spoons over the gas flame on the stove, the blue of it, noble.”

Note what the language does here. It reveals that a brother and sister are in a house that feels “like a cowl on the head.” Rain is not only falling, but is “a wall of birds,” which is, of course, a metaphor, one that gives the rain more weight, even a musicality. Each character is given one word each. The speaker’s voice is akin to a song, the brother’s nearly barks. It’s not much, but it’s a beginning. Everything and anything that transpires in a story cannot be brought to bear without language. For some writers, language is utilitarian, almost flat, like cardboard. It’s merely a tool, but for me, language has a kind of supremacy. I cannot, nor do I wish to, eradicate my poetic training. I think my exacting attitude toward language slows me down, but this is what I want it to do.

Isn’t this the work of literature intended to slow us down, make us take heed, take note, to help us examine each minute and nuanced particle of existence? Isn’t this the scathing beauty of it? I need the work to help me do this. To slow me down, until I get down on my hands and knees in order to examine each gritty and awful detail, which in itself is a cosmos. The sequence and ordering of each exquisite, or piercing, or horrifying detail is how a composition is made. This is what I’ve given my life over to. This slow, painstaking work. There’s nothing noble in it. But it’s what I do.

Language is how I journey into any piece of work. As I go deeper into the writing of stories, the more I want other aspects to surface and accrue power, namely, the narrative drive, which is akin to verbs. Narrative comprises its musculature. It’s what drives the story forward and around and back out again. I can’t say I do any of this well, but I can say that, at least for this writer, the attempt, even when it fails, and mostly, is does fail, is glorious. It’s the experience of what happens on the page that I crave. And language remains my vehicle of transport. The way it parallels life is, I think, magnificent, even when my stories convey the bleakest of realties, the journey is entirely worth it."

Elizabeth’s book is available on Amazon and you can learn more about the author on her website.