Series review: Why You Should Watch Harrow 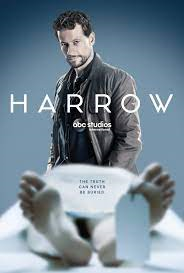 Harrow, starring Ioan Gruffudd is a definite must-watch. The premise: “Harrow tells the story of Dr. Daniel Harrow, a forensic pathologist with a total disregard for authority. He has an unfailing empathy for the dead which helps him solve even the most bizarre of cases. Willing to bend every rule, he is determined to give victims a voice and reveal the truth behind what happened to them. Meanwhile, a terrible secret from his past threatens him, his family, and his career.” (Wikipedia). However, the charm and appeal of this series lies not in the main character Harrow, but in the solid story setting, Australia, and its really great cast. Interestingly, I don’t really care for Gruffudd because I find him rather louche in his portrayals – perhaps just a case of always being cast as the handsome, lightweight, and vaguely suspect leading man? While it is all about him and his secrets, the past that rears its ugly head at inopportune moments, the main stories never get shunted to the background. Harrow and his team are always on a case, which they solve.

For me, the delight in this series comes in the form of two unlikely heroes: both middle-aged, slightly overweight, successful but insecure. Darren Gilshenan, whom I have never seen before, plays Dr. Lyle Fairley, a pathologist, a rule follower, and positive stickler when it comes to the nitty-gritty. He absolutely shines in his idiosyncrasies; an all-consuming love for everything Asian, which includes imbibing odd-smelling herbal brews and boasting an encyclopedic knowledge of Asian history and artifacts. He is absolutely hilarious and very watchable, maybe even a scene stealer… Hero #2 is Damien Garvey as Bryan Nichols, Detective Senior Sergeant at Queensland Police's Criminal Investigation Branch. He is also a real pleasure to watch. The archetypal straight arrow, also a stickler for the rules, life and people sometimes disappoint him. One of the best scenarios is when Harrow, Fairley, and Garvey go camping on a mano a mano camping trip that turns deadly.

Australia is a character all on its own and it shows in the way this is filmed. The Aussies are down to earth, straight-talking, and call a spade a spade. I know because I have literally hundreds of ‘rellies’ there. While watching, you truly believe that the characters are real people. It is so refreshing to see. The scripts are excellent and the dialogue is very natural. The location is Brisbane and surrounds, but there are a few episodes shot in the Outback. Don’t miss this one. I am hooked.