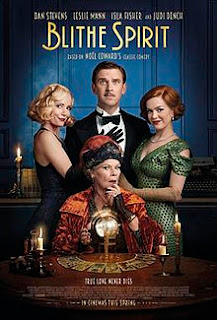 Blithe Spirit, based on the 1941 play by Noel Coward, is about a writer, Charles Condomine (played by a lacklustre and hammy Dan Stevens), who gets a fake medium, Madame Arcati (superbly performed by the inimitable Judi Dench), to hold a séance at his house. Although a successful writer, he needs some inspiration for a film script that has stalled. To everyone’s amazement, especially Madame Arcati, she conjures up the spirit of Charles’s first wife Elvira, now deceased, played with over-the-top venom by the exquisite Leslie Mann. The problem is Charles has remarried and his new wife is Ruth (played with tight anguish by Isla Fisher). She is very much alive. Charles is the only person who can see Elvira who wants her old life back… and her husband. She sets out to wreak havoc in Charles’s life and succeeds. Charles must banish Elvira, but how?

It’s hard to explain why this movie did not work for me. I have seen the black and white version, as well as the stage play several times, and really enjoyed them. The supporting cast has some notable and excellent actors – Emilia Fox, James Fleet, Michelle Dotrice et al. Judi Dench/Madam Arcati was just stupendous as the well-meaning but incompetent medium who succeeds by accident just when she should not have done. The costumes were truly fabulous, and I loved the styles which could be worn today quite easily. The sets were sumptuous as well. All the ingredients for an exceptional movie and yet around the first third, the pace dragged. I feel that Dan Stevens is the weak link in an otherwise strong chain. The variety of dangerous/dramatic supernatural events were too many and the developing relationship between Elvira and Charles as she reignites his creativity also palled. Because I so enjoyed the original, I was disappointed that I did not love this movie. But I’d advise viewers who love something fun and supernatural to still give it a try. There is a lot to enjoy and some really surprising twists. 3/5