Julian Twerski isn’t a bully. He’s just made a big mistake. He has done something he is deeply ashamed of, something that goes against the grain of his conscience. When he returns to school after a weeklong suspension, his English teacher offers him a deal: if he keeps a journal and writes about the incident that got him and his friends suspended, he can get out of writing a report on Shakespeare. 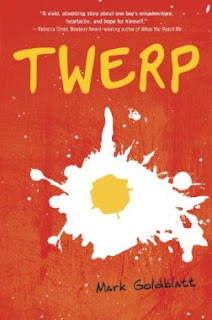 Julian jumps at the chance. And so begins his account of life in sixth grade—blowing up homemade fireworks, writing a love letter for his best friend (with disastrous results), and worrying whether he’s still the fastest kid in school. Lurking in the background, though, is the one story he can’t bring himself to tell, the one story his teacher most wants to hear.
There’s nothing like a ‘real’ story to bring a smile to one’s face. The book was inspired by author Mark Goldblatt’s own childhood growing up in Queens during the 1960s. Reading it, one can’t help being taken back to the ‘growing up’ years, when everything is confusing, nothing goes right, everyone else is cooler/faster/cleverer and girls are an unfathomable mystery. Told from Julian’s point of view in typical middle-grader stream of consciousness, the author takes the reader on a trip back in time. Incidents pack Julian’s life and he reacts to them in a visceral and sometimes confused way. Life lessons can be hard, and Julian rolls with the punches, doing his best. He doesn’t always pull it off, but he does make sense of things where he can. Julian is a likeable character and he truly does want to make amends. Kids will enjoy this, but I think their parents will also relish this trip down Memory Lane. Times may change, but kids don’t. Author Mark Goldblatt’s style is quirky and different, but appealing with a touch of nostalgia. Five stars.
About the author: Mark Goldblatt is a lot like Julian Twerski, only not as interesting (that’s what he says!). He is a widely published columnist, a novelist, and a professor at the Fashion Institute of Technology. Twerp is his first book for younger readers. He lives in New York City.

Please note that I reviewed an ARC. The book will be available on 28 May 2013.

Thanks for the review. This is a book I'm really interested in reading.

Sounds like a great read for middle grade readers. Thanks for sharing!
-Reshama
www.stackingbooks.com

I just got this book from NetGalley. It sounds awesome, and I am glad that you enjoyed it. Thanks for linking it to the Kid Lit Blog Hop!

I am visiting you from the Kid Lit Blog Hop & I LOVE your review of this book! You really made the book come alive - it sounds like a great read!

I am now following you & I look forward to getting to know you better! Hope to see you at:

Thanks for the comments. I am sure you will all enjoy it. There are so many details that resonated with me as an adult as I remembered things from childhood.

Thanks Fiona for a great book recommendation. This is so intriguing. I love the premise. I will pop that on the to read list.
Thanks for linking it in to the Kid Lit Blog Hop. Cheers Julie

Hi Fiona
thanks for a great book review and recommendation. I love the premise and it sounds totally intriguing. Thanks for linking in to the Kid Lit Blog Hop.

This book sounds like a really great middle grade read. I don't know why but I keep thinking it sounds like a John Irving novel for tweens. Thanks for posting your review in the Kid Lit Blog Hop and for sharing this fun book. :D

I have an e-arc waiting on me and thanks to your review I bumped it up my list. I can't wait to dive in.

I am so glad the review was helpful. There's so much in there for adults as well.