I love murder mystery books and movies. There's nothing like trying to guess whodunit! Imagine when there are four possible victims, and a mysterious killer who remains an enigma until the very end? Author Duncan Whitehead has created a wonderful microcosm of society in Gordonston in his book The Gordonston Ladies Dog Walking Club.
When Thelma Miller dies, everything changes in the leafy Savannah neighborhood of Gordonston. Her three closest friends and fellow members of her afternoon cocktail club (aka Gordonston Ladies Dog Walking Club) gather to mourn the death and lament the life of their neighbor but already the dynamics of their once close relationship have changed. Gordonston is a typical gated community, where all is amity and tranquillity, and the only thing that mars this idyllic existence is the ONE person who does not scoop the poop after walking his dog. Thelma’s death unleashes a relentless juggernaut of revenge that crashes into these once-peaceful lives. Old sins cast long shadows and ancient histories are revealed in an intertwined web of deception. A killer lurks in the wings and is anyone really who they seem to be?

Hearts beat faster, passions surge, and dark secrets spill over and threaten to destroy the harmony. Age is no barrier to desire—when the chips are down, the resident widows will do anything to secure the affections of the newly widowed Elliot Miller who has political prospects. Added to this overriding theme are the various ambitions of a motley assortment of characters. From the mysterious 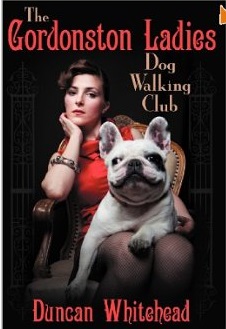 European gentleman in South America, the young Italian count in Paris and a charitable and kind hearted nephew recently arrived from India, to the lovely Kelly (who could even be a model) and her handsome fire-fighter husband, to the Englishman (who seems suspicious) and his young daughter, and finally a mysterious killer with links to organized crime. Who is destined for an early-unmarked grave in the wooded park that centers the tree-lined avenues of Gordonston?

This is an absolutely hilarious cosy murder mystery with a kick. A chilling beginning develops into a full-blown saga of intrigue, deceit, and vengeance as petty rivalries escalate and various players set wheels in motion to accomplish their ambitions. With an unerring eye, author Duncan Whitehead homes in on the tiny details that make each character unique. His darkly comic style is reminiscent of Alexander McCall Smith’s writing, with a dry, tongue-in-cheek touch. Seemingly unrelated people and events are drawn into a deadly entanglement that keeps the reader glued to the pages until the dénouement that surprises. I really enjoyed this book and look forward to more from this author. Recommended. Four Stars


First reviewed for Readers Favorite
Posted by Fiona Ingram at 6:23 AM

Thanks for the great review, so glad you enjoyed it Fiona! It is now available for only $2.99! ....and I am working on the sequel!