Back Cover Copy: Is Yours Misleading?


It seems like a strange question: is your back cover copy misleading? After all, as writers we constantly hear about the importance of back cover copy. A book's cover, inside copy (if there is any) and back cover copy are vital to hooking a reader into buying your book. Apart from word of mouth and reviews, both very subjective options, readers have no other way of deciding if they want to purchase your book or not.

So, perhaps another way of putting it could be: does your book live up to the back cover copy? 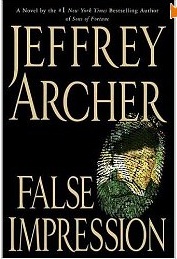 I was inspired to ponder upon this question after I read False Impression by Jeffrey Archer. The author is not my first choice when it comes to books. However, he is a skilled and accomplished storyteller, as his multimillion-dollar sales attest. Who can forget Kane and Abel? I took the book out the library for my Aged P, an avid Archer fan. If Mr. Archer rewrote the telephone directory, Mom would read it. Oh, if only we all had such devoted fans. But, back to the book. I read the back cover blurb below:

Why was an elegant lady brutally murdered the night before 9/11?
Why was a successful New York banker not surprised to receive a woman’s left ear in the morning mail?
Why did a top Manhattan lawyer work only for one client, but never charge a fee?
Why did a young woman with a bright career steal a priceless Van Gogh painting?
Why was an Olympic gymnast paid a million dollars an assignment when she didn’t have a bank account?
Why was an honors graduate working as a temporary secretary after inheriting a fortune?
Why was an English Countess ready to kill the banker, the lawyer, and the gymnast even if it meant spending the rest of her life in jail?
Why was a Japanese steel magnate happy to hand over $50,000,000 to a woman he had only met once?
Why was a senior FBI agent trying to work out the connection between these eight apparently innocent individuals?
All these questions are answered in Jeffrey Archer’s latest novel, False Impression, but not before a breathtaking journey of twists and turns that will take readers from New York to London to Bucharest and on to Tokyo, and finally a sleepy English village, where the mystery of Van Gogh’s last painting will finally be resolved. And only then will readers discover that Van Gogh’s Self-portrait with Bandaged Ear has a secret of its own that acts as the final twist in this unforgettable yarn.

It sounds utterly incredible, doesn’t it? The world’s biggest disaster bar the sinking of the Titanic; the murky world of double-dealing in priceless art; an unscrupulous banker; an innocent art expert who is wrongly accused; an assassin with a penchant for kitchen knives… I could go on and on. This book has all the ingredients of a great thriller, plus some extra art info on the side and a cleverly punned title. I read the book. I couldn’t help myself, after such enticing back cover copy!

So, why was I disappointed? Because the book did not live up to the exciting menu on the back cover copy. Did the author or publisher mislead me? No, all those things took place. Were all the loose ends tied up? Absolutely. So…?

Having been promised a fast-paced thriller, with great characters, I was disappointed because I received a plodding and formulaic conspiracy-meets-art-theft storyline, with characters that are mere cardboard cutouts of what they could have been. While not exactly airport cannon fodder, False Impression veers alarmingly close to that category. I would rate it a three-star read.

Another example is The Malice Box, by Martin Langfield. I read the back cover copy, was entranced by the glittering, embossed cover, and found myself deeply disappointed by a muddled story that began with a thrilling bang, and ended with a mystical whimper. I would rate it three stars. 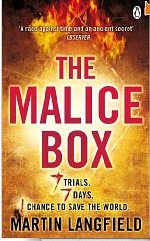 Publisher’s Weekly had this to say: Owing an obvious debt to Dan Brown's mega blockbuster The Da Vinci Code, Langfield's ambitious debut incorporates elements of supernatural mystery, Dante-esque journey and apocalyptic thriller, but the pieces fail to come together into a satisfying whole. With a powerful alchemical weapon primed to detonate in a week's time, Robert Reckliss must unlock seven puzzles and find seven keys hidden around Manhattan before the Malice Box unleashes some unspecified evil on the inhabitants of New York City. Standing in his way is the Brotherhood of Iwnw (pronounced yoonu), otherworldly scavengers of the soul bent on remaking civilization with themselves as overlords. Two-dimensional characters, contrived situations and a mishmash of plot-threads—a potentially world-altering discovery involving a recovered document written by Isaac Newton, secret societies, gateways between worlds, America's war against terrorism, Christian and Islamic mysticism, ley lines—make this one of the weaker contenders in the crowded religious thriller field. (taken from the Amazon book page)

The bottom line is this: are you giving readers the wrong impression of your book’s content? Is your story what you say and think it is? Ponder upon the potential response from a reader, not how you want to appear as a writer. I am both an avid reader and a writer. I love books. I feel disappointment like a blow when a book does not give me what it promises. Are Jeffrey Archer and Martin Langfield bad writers? No, they are excellent, possibly brilliant writers, but the books did not deliver what they promised.

Let’s clarify that sentence: to me. Both books have reviews ranging from five to one stars. The writers are published by top publishers (St Martin’s Press and Pegasus). They know what they are doing, but these two books don’t deliver on the promise.

Look at your back cover copy.

Is your plot thrilling? Check.

Are your characters real and convincing? Check.

Is your storyline compelling? Check.

Do you think your reader will be disappointed because the book ends, or at the end of the book?