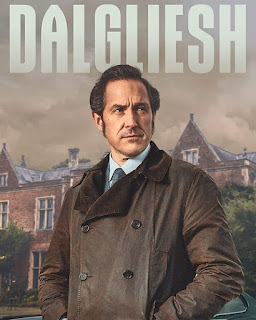 Dalgleish. Just the name sums up our titular hero, Detective Chief Inspector Adam Dalgleish. He is also a published poet and recently lost his family, giving him empathy and insight into the human condition, especially that of suffering and despair. The six-part (with hopefully more to come) series is based on three Adam Dalgleish novels by the acclaimed crime writer PD James. This series covers Shroud for a Nightingale, The Black Tower, and A Taste for Death.  I won’t say any more about the novels because I don’t want to spoil it for readers new to PD James, plus established fans are no doubt very familiar with the novels.

Bertie Carvel is an actor I have never seen before, and I am surprised! He has a slew of acting credits to his name and makes me want to find other productions he has featured in. He is Dalgleish, as David Suchet is Hercule Poirot. Tall, handsome, erudite, courteous (as opposed to merely charming), and elegant, Carvel epitomises Dalgleish. His complete polar opposite is DS Charles Masterson, played by Jeremy Irvine. This character is everything a woman is NOT looking for in a man. He is suave in a cheap cologne way, treats women like second class citizens, and generally is not very likeable. He opens his mouth to change feet. Viewers will hope he falls into a deep hole and is never rescued. However, his fatal flaws make Dalgleish’s virtues shine ever brighter. Supporting cast performers are excellent with some familiar faces.

The cinematography, sets, costumes, and everything that goes into a period piece are excellent. The mid-1970s is perfectly captured, down to the ‘look’ of the era, with that slightly grainy, washed-out colour palette. Hard to explain, but once you watch, you’ll see. Since the stories start in the 70s, snowflakes beware: this is when social issues/social justice/women’s rights/attitudes to women were not what they are now. If this kind of thing offends you, don’t bother watching. For viewers who accept that history is what it is, you’ll enjoy the whole package – plot, acting, performance, photography, and settings.

I am familiar with the Dalglish novels, and, to my great relief, the script writers cut out much of the meanderings and unnecessary distractions of the novels. I find that PD James erred on the side of over-loquaciousness in many of the later novels with deep and thoughtful digressions into the mind set of characters that did not really fit into the murder mystery genre. That’s just my opinion. Many readers may feel otherwise. However, as a viewing package, Dalgleish the series is just superb! Don’t miss it.