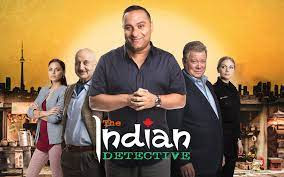 The Indian Detective is a comedy-drama caper about Doug D’Mello (comedian Russell Peters) who goes to visit his father Stanley (Anupam Kher) in Mumbai for a month, after being suspended for incompetence in a Toronto drug bust gone wrong. Once there he becomes embroiled in a web of international crime, drugs trafficking, corruption in the construction industry, and various other nefarious activities. Although not exactly a detective in Toronto (just a police officer), by the time Doug arrives in Mumbai he finds his reputation has been significantly embellished by his doting father in the way of all doting parents. This has elevated him to the status of detective. Almost by accident he gets involved in sorting out various crimes, at first resisted and then assisted by a stern-faced inspector (Meren Reddy) and the ravishingly beautiful lawyer Priya (Mishqah Parthiephal). Hi-jinks and action ensue as Doug tries to conceal his feelings for Priya while getting to the bottom of several murders and various crimes committed by well-connected and funded criminals.

Don’t expect a big budget affair with plenty of special effects and sweeping vistas, a polished script, and consummate directing. In fact, you won’t get any of that. The plot has so many holes it is like Swiss cheese, the directing is downright sloppy, and often one gets the feeling the capable actors are doing it themselves. However, there are plenty of pluses to make this an enjoyable romp providing you don’t think too hard about it. Set in India, Toronto, and South Africa, the director/DOP decided in their lack of wisdom to give flashes of scenery in a very jarring effect, so the audience won’t realise it is not all India. Please… give me a break. As a South African, I spotted every flash of a Cape Town scene and picked up every South African Indian accent. Not that these details matter once you get involved in Doug’s odyssey of bringing justice to the victims.

In every movie or series there is always one or a couple of characters who steal every scene they are in. Meet Stanley the Manly, Doug’s dad, who is concealing a heart condition from his son. He used to be a glamorous high-flying airline pilot, but these days he takes flight only in his memories. In an effort to relive his salad days, he wears a truly awful wig. I have seen awful wigs in movies where you know the budget could have shelled out for a decent one, but here the very horribleness of the wig is part of Stanley’s ‘manly’ charm. His banter with his manservant/old friend/butler, Dattu, ably performed by Fahruq Valley Omar, is hilarious. These two bicker like an old married couple and have you in stitches with the best lines. Other familiar faces include UK actress Christina Cole who looked a bit out of her depth and veteran actor William Shatner who proves that age is just a number!

But don’t try to find the flaws, just enjoy the story. Doug D’Mello is an appealing character, and it looks as if we’ll be seeing more of The Indian Detective. 4/5