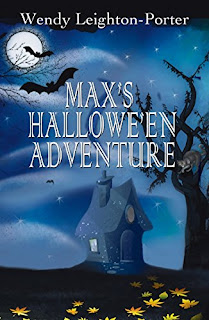 It was the loveliest summer afternoon, perfect for a relaxing snooze... especially for a cat. Max was in the middle of a most pleasant dream involving being fed strips of smoked salmon by a very pretty girl when he smelled smoke! Smoke? Gasp! That meant fire! Fire? That meant danger!!! Maybe lives must be saved. Where was everyone? He had to save the book, the book that had started the whole series of adventures, with the twins’ parents becoming lost in the mists of time, trapped in the pages of history. He couldn’t let the book be destroyed, because then Mum and Dad would be gone forever. However, when he plunged (not very) bravely into the smoke, he found himself back in the past, in 1644 to be exact, and he just knew that somehow this involved another very uncomfortable adventure that he hadn’t asked for!


A snarky cat called Berry was waiting to take him back to a tumbledown old cottage that seemed strangely familiar, and in fact, he’d already been there in a previous side adventure of his own (Max’s Christmas Adventure). The whole place was quite spooky, and there was a weird old woman called Goodwife Clowes, who insisted he was necessary to help rescue her sister from an evil man. Combined with this rude cat’s annoying attitude (or should that be cattitude?), Max just longed to go home. Then the weird old woman told him that the evil man was a witchfinder and that’s why he was needed to rescue her sister. Witchfinder? Max asked himself (as did I) was that even a job? In a nutshell, the Witchfinder General (the man had even given himself a title!) was going from village to village, rounding up women who might be witches, or who people had accused of witchcraft. Many innocent people in the village of Mistley Thorn would suffer if Max didn’t help. Can he muster up the last remnants of what passed for courage to lend a hand?


Max has the unfortunate tendency to be thrust into situations that require great bravery and feats of derring-do when this is entirely not in his nature. Once again, he’ll have to pull out all the stops. A brief and memorably nasty encounter at the local jail reveals the enormity of the situation and the truly evil nature of Matthew Hopkins, who specialised in sniffing out witches, or in fact any old lady (like this one), with a broom and a beady stare. Lovely details place young readers right into the setting of All Hallows’ Even (which we know as Hallowe’en), with a suitably eerie atmosphere and an uncomfortable amount of danger. But the peril is too great, the Witchfinder and his men can’t be overcome by two mere cats, even talking ones. Inevitably, Max is sent back to his own era, to plan and return to defeat the Witchfinder. Now Max has the reassurance of Jemima, Joe, and brainy Charlie on his side as reinforcements! Watch out, Witchfinder. Max will be back!


Author Wendy Leighton-Porter, as always, has a treasure trove of extra detail for avid young fans of the series and this fifth mini adventure in Max’s side forays. The origins of Hallowe’en and the pagan festival of Samhain are explained, as are local suspicions of the time and details of why people were blamed for natural disasters and diseases. Lovely word play ensues as well with Max getting quite confused about names, although given the stressful situation, this is quite understandable. Max’s Hallowe’en Adventure is a delightful and deliciously scary prelude to the next adventure (the tenth) for Jemima, Joe, and Charlie, entitled The Shadow of the Witchfinder. It has a wonderfully spooky cover and I can’t wait to read it!
Posted by Fiona Ingram at 1:42 AM