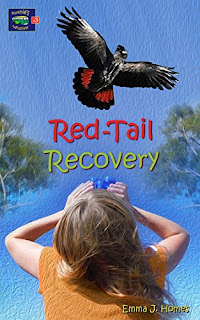 
Ruthie is such a lovely young role model for readers to emulate, and I really like how author Emma Homes manages to teach while creating a great and new adventure for many kids, who may never have had any close encounters with the animals and birds of their own country. The story shows very clearly how all of life is entwined, from destruction of trees to changes in environment, and how all this affects the cycle of wildlife; how each creature has its role to play in the ecological chain. I also liked the forward thinking that the story demonstrates, and how Bel’s idea of planting trees will help create a safe environment for the birds to flourish. As Ruthie realises, “Even a small step in the right direction was a difference they could all be proud of.” A small endnote gives readers more details about the Red-Tailed Black Cockatoo. The perfect gift for readers who love adventure and the outdoors, and young wildlife and bird enthusiasts.
Posted by Fiona Ingram at 2:52 AM