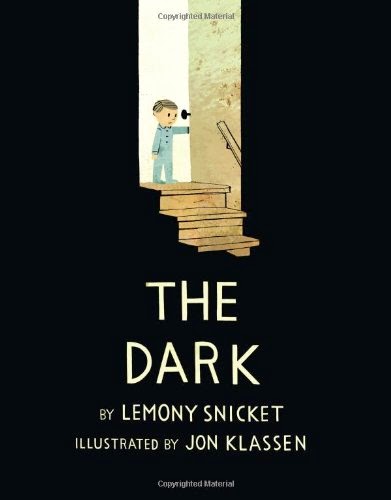 The dark is a very interesting thing. There’s a lot of it when the light is off, as young Laszlo finds out when his night light bulb fails. Then the dark comes into his room. Prior to this event, the dark lived quite happily in (unsurprisingly) dark places such as the basement, drawers that no one ever opened, and occasionally behind the shower curtains.
At night the dark had a huge expanse to roam outside the creaky old house where they both lived. Laszlo and the dark respected each other’s space. The dark knew Laszlo and Laszlo knew the dark—in fact they even greeted each other. Well, the dark didn’t actually answer back. It never spoke until one fateful night when the bulb in Laszlo’s night light fails. The dark calls to Laszlo. Then Laszlo gets out of bed and answers the dark, which leads him all the way down to the basement…


This deceptively simple illustrated story is especially relevant for kids who are afraid of the dark. Who can say they didn’t fear something that lived under the bed, behind the door (no, that was never an old dressing gown!), or at the bottom of the stairs? This book depicts the dark and the fears of a little boy who has to learn that everything has its designated place and purpose. Without the dark there is no light. Without the night there is no day. Without the dark we would never see the moon and the stars. Without all the things in Laszlo’s house, providing hiding places for the dark, there would be no dark. And the dark is a necessary part of life.
The size of the book, 11x7.1 inches, is actually the perfect size for little hands to grasp. In addition, the dark looks very big (there’s a lot of it, as I said) while Laszlo looks very small, creating a huge contrast between them. The story has mystery, shivers, scary bits, and leads the young reader all the way down to the basement, where the dark turns out to be very helpful indeed. I’d recommend this for all young readers and their parents (who might still be afraid of the dark). The Dark is a charming tale by the inimitable Lemony Snicket, beautifully illustrated by Jon Klassen. Five stars.
by Fiona Ingram
Posted by Fiona Ingram at 8:35 AM