When I Judge a Book by its Cover...

When I judge a book by its cover, it means I want to show off a fabulous new book with a beautiful cover, in my huge sets of bookcases that dominate my living room. I love real books. I won’t say I hate e-books, but I’ll only buy an e-reader when no more real books are printed. Given the number of people who also love real books, maybe we can stave off that awful day. I wonder if many people know this, but when you buy a real book and take it home to gloat over, it’s actually yours for keeps. When you buy an e-book, you’re actually only buying the right to read it… But, hey, let’s not go into all that. Let’s stick to real books.

This post was inspired by my annual attendance at the Exclusive Book’s annual sale. (Exclusive Books is South Africa’s leading bookstore and cleverly align themselves with a coffee shop to add extra comfort to book-lover browsing) People love the sale because all the books are marked down, and it’s one way of stocking up on expensive items that might just break the budget. So, what did I buy this year? Aha! I generally pick non-fiction because they are usually hard cover. I also tend to read a lot of non-fiction for research into my children’s adventure series, and because I like history.
The Secret History of Giants by Ari Berk 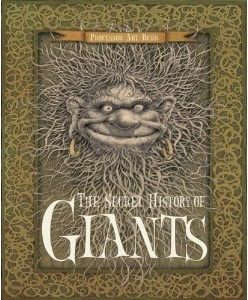 I know giants are not strictly non-fiction, but ever since a light-fingered somebody walked off with my Book of Giants (no longer in print), I have wanted a replacement. I mean, what is a home without a book on giants? I already have Brian Froud’s Faeries and The Book of Good and Bad Faeries, so definitely a giant replacement was on the cards. This is what the blurb says: Ancient Greece had its Titans, the Celts their Green Knight, the Bible Goliath—and for those who know where to look, signs of these legendary hulking creatures still abound. Now comes a hugely engrossing chronicle of giants since antiquity, from their role in forming mountains and causing earthquakes to the mysteries of their sacks (watch out for hitchhiking humans); from their means of employment (how did the Druids built Stonehenge?) to an extensive map of places around the world where giants may likely be found. Exhaustive and lushly illustrated, this enormously valuable resource is sure to fascinate all who open its covers.

Special features include: sundry flaps, booklets, and gatefolds; a lavish foiled and embossed cover (and it is lavish!); an elegant tassel (very elegant!) dangling from the spine.

Babylon: Mesopotamia and the Birth of Civilization by Paul Kriwaczek 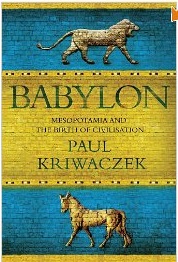 Civilization was born eight thousand years ago, between the floodplains of the Tigris and Euphrates rivers, when migrants from the surrounding mountains and deserts began to create increasingly sophisticated urban societies. In the cities that they built, half of human history took place. In Babylon, Paul Kriwaczek tells the story of Mesopotamia from the earliest settlements seven thousand years ago to the eclipse of Babylon in the sixth century BCE. Bringing the people of this land to life in vibrant detail, the author chronicles the rise and fall of power during this period and explores the political and social systems, as well as the technical and cultural innovations, which made this land extraordinary. At the heart of this book is the story of Babylon, which rose to prominence under the Amorite king Hammurabi from about 1800 BCE. Even as Babylon’s fortunes waxed and waned, it never lost its allure as the ancient world’s greatest city. Engaging and compelling, Babylon reveals the splendor of the ancient world that laid the foundation for civilization itself. (I can’t wait to get stuck into this!)
House of Wisdom by Jonathan Lyons 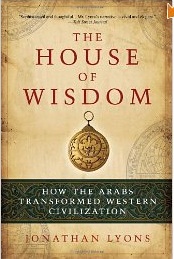 Although I see this book received mixed reviews on Amazon, I’m willing to give it a chance. The blurb says: For centuries following the fall of Rome, Western Europe was a benighted backwater, a world of subsistence farming, minimal literacy, and violent conflict. Meanwhile Arab culture was thriving, dazzling those Europeans fortunate enough to visit cities like Baghdad or Antioch. There, philosophers, mathematicians, and astronomers were steadily advancing the frontiers of knowledge, as well as keeping alive the works of Plato and Aristotle. When the best libraries in Europe held several dozen books, Baghdad's great library, The House of Wisdom, housed four hundred thousand. Jonathan Lyons shows just how much "Western" ideas owe to the Golden Age of Arab civilization. Even while their countrymen waged bloody Crusades against Muslims, a handful of intrepid Christian scholars, hungry for knowledge, traveled East and returned with priceless jewels of science, medicine, and philosophy that laid the foundation for the Renaissance. In this brilliant, evocative book, Jonathan Lyons reveals the story of how Europe drank from the well of Muslim learning.
The Illustrated Anthology of World Myth andStory Telling by C. Scott Littleton (editor) 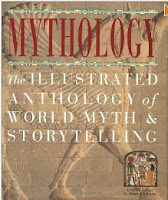 Back to the covers: a gleeful giant peeking out of one cover, a Babylonian lion striding across a turquoise background, the delicate beauty of Arabian craftsmanship, and a winged Assyrian sculpture on a sandstone background, these books all merit pride of place in the looks department, and I am sure contain a wealth of knowledge!