Given that we are creeping closer to the Mayan calandar's predicted catastrophic date of 21 December 2012, Have you ever wondered what it’s all about? Why are we here? Where did we come from? Where are we heading? Given the chaos, crime, pollution and society’s troubles, are the old biblical prophecies correct and the hellfire and damnation scenario awaits us when the end of the world comes? Recently I read and reviewed Alpha to Omega: Journey to the End of Time for some answers. 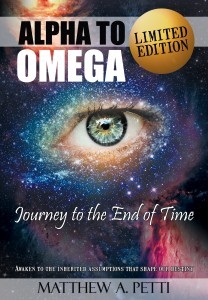 Author Matthew Petti formulates a fascinating theory that only by knowing where we came from do we have an idea of where we are heading. In this book, he sets out to prove our true ancestors. Our flaws as humans, and our failure to change, arise from our historical thinking. Yes, we are simply repeating what we have learned. Today’s chaotic world mirrors the cumulative effects of the unchanging flaws in our most basic assumptions. Beliefs about God, our origins, human history and the hereafter are deeply embedded into the collective mind through the inheritance of age-old teachings and behaviors. The author investigates the metaphysics of faith, and why old beliefs have failed humankind in a modern world. This includes as analysis of the Book of Revelations as an indication of what may (or may not) transpire if the world continues on its headlong course of destruction.

This is a controversial book. The author delves into ancient history (including prehistory and Biblical history), archaeology, geography, myths, and legends to link together a collective mind-set or ethos for human society from those small beginnings many thousands of years ago. One may or may not believe in the supremacy of angels and the workings of heaven in human affairs, but Matthew Petti puts forward an intelligent and logical argument to substantiate his theories. He discusses his ideas of the ‘God’ spirit within humans, a controversial topic on its own, including free will and God’s will, and the concept of obedience to a higher power. To fully appreciate the author’s thinking it’s better to either have belief in some higher power and acceptance of Biblical references and characters, or else (if one is an atheist/agnostic) to suspend disbelief and simply read this book as a fascinating investigation of man’s possible superhuman and human origins. Well-researched and -argued, the book is a journey in itself for anyone interested in our physical origins and spiritual development.

I enjoyed this book because I find ancient history and man’s origins fascinating. I also decided to ask the author a few questions about it.

1. What made you write this book? You’ve done a huge amount of research and put a lot into it – there must be something driving your work.

﻿
﻿My lifelong search for meaning to our existence began at the age of 22. One summer evening in 1977, while driving on an open highway, I had a thought, “There really is a God.” This wasn’t new to me, having been raised Catholic, attending 12 years of Catholic School and following all the rituals of the religion. As I began to agree with the thought, it echoed with an extreme profoundness and suddenly I found myself gasping for air as a surge of new conceptual information began to flood my mind and overwhelm me. I couldn’t assimilate all the information, but an INSATIABLE curiosity to dig deeper into the book of Revelation immediately ensued.

The remnants of ancient advancements dating to about 15 to 20,000 years ago, which have been found on the Yucatán Peninsula, Mesoamerica, Easter Island and Machu Picchu, just to name a few, are a thorn in the side to the archaeologists, scientists and historians who preach the linear view of evolution and human development. The problem with other theories, which attempt to explain these advancements as the result of a recent previous civilization eradicated by some sort of cataclysm, is that they cannot be supported by prevailing scientific evidence proving that never in the history of humans (1.5 million years) has the world and its inhabitants been completely annihilated.

Ancient alien theory has emerged as the only explanation to the architectural wonders discovered because it circumvents the scientific evidence. The traditional scientific viewpoint holds that mankind was strong enough and willful enough to account for many of the ancient mysteries. Ironically, the most glaring contradictory evidence is swept under the rug in an effort to maintain the support of uninformed constituents.

Meanwhile, the religious viewpoint claims a great flood occurred, which totally wiped out a society, except for eight people and hundreds of thousands of animals on board a ship, who were somehow able to completely repopulate the Earth. Once again, scientific evidence proves that this could not have happened—at least not in the last 1.5 million years— while common sense tells us that it would've been impossible to board a ship with seven pairs of every species of animals on earth.

Since there is no evidence of a supreme society in our recent history, but instead, remnants of advanced achievements, which surpass both the technologies available during those times and today, then we can assume that the gods and demigods of ancient myths were the offspring of those who survived a cataclysm of 7 million years ago. 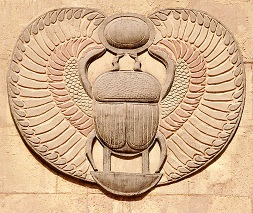 3. Why can’t we recreate the level of achievements they left behind, given our computer advantages, and other developments that would surely outweigh the flaws you say are inherited from the past and a previous, repeated mindset.

4. I read authors like Andrew Collins and Graham Hancock who also share your interests. What do you think of their investigations and conclusions? 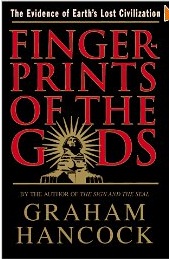 Their investigations, among others, were paramount in providing the evidence I needed to faithfully assert that science and archaeology are equally as biased in their determination of history as religion. It is equally absurd to believe in the 6000-year-old creation story as it is to believe that the Egyptians built the Great Pyramid. Thanks to them and others like them, I was able to provide my theory.

5. Your book is heavily based on the Bible, and your discussions of the angelic/divine relationship between heaven and earth reflect this. How many people think of the Bible as a history book, not just a book of inspired writings from long ago?

I'm not sure how many people, as a percentage, view the Bible as a history book. I don’t want people to think my book is really “based” on the Bible, because that might imply that I accept the literal translation. My book is a NEW way of explaining it and other pertinent mysteries relating to our past and the inevitable future to which it is bound. The book of Revelation is a cryptic message that has unveiled more than just the future to me.

6. The Book of Revelation features strongly in your work. Do you think it’s possible to avoid the apocalyptic forecast of what will come, given the nuclear arms race, the declining state of the planet, and man’s inhumanity to man? Or is it too late?

War, devastation and all of life's tragedies are inevitable until we completely awaken to Truth. The events, which have always been attributed to God's judgment, are really a gift that will eventually lead us back to the Omega, which is absolute fulfillment of Truth and Knowledge. So yes, the events are unavoidable but so is the return to Paradise!