Imagine creating a character so popular that when you get bored with him, and try to kill him off, your readers rail against you. Finally, public opinion forces you to resurrect your creation. This is exactly what happened to Sir Arthur Conan Doyle, the creator of the world’s greatest detective (apart from Hercule Poirot who considers himself the world’s greatest detective).

Sherlock Holmes is an unforgettable character that has possibly changed the literary face of detectives. A London-based “consulting detective” whose abilities border on the phenomenal, Holmes is famous for his astute logical reasoning, his chameleon like ability to change his appearance, and his use of forensic science skills to solve difficult cases.

The Guinness World Records has consistently listed Sherlock Holmes as the “most portrayed movie character” with 75 actors playing the part in over 211 films.

Conan Doyle wrote the first set of stories over the course of a decade. Wanting to devote more time to his historical novels, he killed off Holmes in The Adventure of the Final Problem, which appeared in print in 1893. Conan Doyle considered the Holmes stories light reading, money spinners, but quickly forgotten, the literary equivalent of airport fiction.

“I couldn’t revive him if I would, at least not for years,” he wrote to a friend who urged Holmes' resurrection, “for I have had such an overdose of him that I feel towards him as I do towards pâté de foie gras, of which I once ate too much, so that the name of it gives me a sickly feeling to this day.”

The public reaction to Holmes's death was astonishing. People behaved as if Sherlock Holmes was a real person, so strongly had the great detective’s quirks and characteristics imprinted themselves on readers’ minds. They even wore black armbands and wrote Conan Doyle both pleading and threatening letters. No author likes being told what to write and it was a long nine years before he capitulated to public opinion and brought Holmes back. After Conan Doyle revived Holmes, he continued to write Holmes stories for another 24 years.

So, what really happened during these lost years?

Holmes tells Dr. Watson in laconic fashion: "I travelled for two years in Tibet, therefore, and amused myself by visiting Lhasa and spending some days with the head Lama."

Two years is a long time. There must have been more to it than that, but without Dr. Watson as the faithful scribe, how could anyone know the truth?

After surviving the incident at the Reichenbach Falls, Holmes travels east to escape Moriarty's henchmen. One wonders, if Holmes survived, what happened to Moriarty? His agents are still active, it seems. In India, Holmes meets a Bengali spy, Huree Chunder Mookherjee, assigned to accompany and protect Holmes during his mission to Tibet, for mission it was. Holmes has adopted the disguise of a Norwegian explorer called Sigerson so that he is able to protect the young 13th Dalai Lama from assassination by a Chinese-backed evil sorcerer, whose secret identity will come as no surprise when revealed. Holmes, ever pragmatic, finds himself at the mercy of mystical elements that almost (but not quite) overpower him as his expedition leads him into the fabled Shambala and events beyond common understanding. Mookherjee admirably takes on the role of narrator, with a quaint turn of phrase and shocked exclamations as things become considerably more dangerous with every passing day. A helpful glossary at the back of the book assists readers with unfamiliar words and phrases. 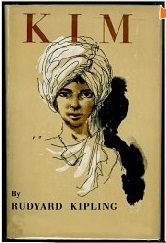 The author draws heavily on books and descriptions of the era, notably Kipling's Kim and Charles Allen’s Plain Tales from the Raj. I loved this book, although the plot veers into a kind of mysticism, which Conan Doyle is more famous for, than his creation. However, the Great Game is wonderfully evident. Holmesian aficionados will not be disappointed although some Baker Street purists might disapprove. The author has captured Holmes' dry wit and abrasive, often mercurial personality.

There are several extremely amusing references in this helter-skelter tale of darkness and derring-do. Note: readers who wondered about the Giant Red Leech, hinted at by Watson, will have their questions answered here. I thought the book admirably echoed the tradition of Conan Doyle and Holmes' many adventures.

A sad, one could say tragic element of the story is the author's concern with China's occupation of Tibet. He weaves in a pertinent political message, but in a subtle way that never interferes with the story.