How Charismatic Must Your Main Character Be?

How charismatic must your main character be to hold reader interest? I just reviewed Johnny Walker's Red where the main character journalist Julie McNamara must hold the attention of her readers while surviving several dire situations, all the time telling us how she feels, what she’s going to do next, and what she really thinks about life. No easy task, but because the main character is strong in herself and her choices, and because the authors clearly defined her from the start, we like her, we’re rooting for her, and we think she should get a job on Time Magazine. 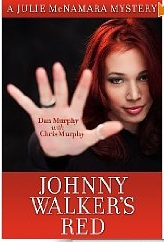 The lesson to be learned from the adventures of our feisty heroine is this:
This is even more pertinent where the main character is the start of a potential series. If you’re not interested in the main character and how their life/exploits will unfold, then why will you buy the next book? So while a great plot is essential, the actions and reactions of a well-defined lead character will determine whether your readers will stick around or close the book … forever.

I enjoyed meeting Julie McNamara in Red and since I am going to be reviewing her next adventure Johnny Walker Black, I am looking forward to finding out what she’ll get up to next.

Book Review: Just how much trouble can a gal get into by losing her job? With 26-year-old journalist Julie McNamara, plenty! Julie’s retrenchment from her job at Polaris magazine catapults her into the kind of seedy world one only reads about. From covering Hollywood A-listers’ glamorous and wealthy lifestyles, Julie ends up scraping the bottom of the career barrel somewhat. She is desperate for work and will do just about anything that pays. Her efforts at catching drugged-up rock stars in compromising situations fail miserably since Julie is incapable of working a camera properly. After two hilarious but disastrous attempts, Julie shelves any future plans involving photography. A surprise twist on an ordinary story she had begun prior to her retrenchment opens up a hotbed of scandal involving Maria Gonsalves, the young Latina running for district attorney and her affair with Johnny Walker, the star center fielder for the Los Angeles Dodgers. Her friendship with Johnny (who calls her ‘Red’) leads her into solving a blackmail scam, with surprising results. However, Julie’s big hot story comes when she stumbles upon irregularities in the Reverend Ben Bradford’s outreach ministries. It turns out that big bucks are changing hands over the Mexican border. Could the charismatic, straight-as-an-arrow reverend be up to no good? Things go downhill pretty fast and Julie ends up being locked in a truck with fifty illegal immigrants, then kidnapped and imprisoned in a padded cell. But come hell or high water, roll those presses because Julie gets scoop!

Julie is a truly likable character. Smart, sassy, and talented, she is also courageous and really good at her job as an investigative reporter. Her relationship with her widowed father, a retired cop, is outlined in simplest detail, but those pertinent points tell the reader so much about Julie. Julie’s backstory, her friendships and relationships are deftly slotted into the story without overwhelming the action because action is what carries the reader on a crazy roller-coaster of events. I found the characters believable, especially Julie. The authors portray the ups and downs, the passions and foolhardiness of a young determined journo in an authentic way. Julie’s mad journey unfolds in an easy-to-read style with the heroine’s dry understated viewpoint actually making many of the situations even more screamingly funny. This is the kind of read where one does not want to leave Julie hanging by a thread, or off a ledge, or anywhere she might need help. Real, funny, fresh and fast-paced, Julie’s story will keep readers turning those pages.

First reviewed for Readers Favorite
Posted by Fiona Ingram at 6:14 AM