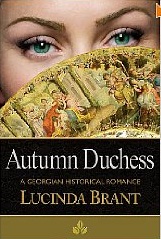 I thought that I knew a lot about 18th Century California when I "finished" the first two novels of my Father Serra's Legacy trilogy.
But, as I am certain many of my fellow authors have discovered, there is NEVER enough research about periods of our past.
Fortunately, a Franciscan Friar sent me one tome about how the priests dealt with the Gentiles [Indians] during that period. Then, I encountered a tome written in the late 1800s that gave an entirely new face on the various problems between the friars and the military.
My major discovery about writing this trilogy is; research, research and more research!

I agree with your viewpoint. There can never be too much research. How fortunate for you to have discovered two primary sources of material for your work!

For me, the master of the modern historical novel is probably E.L. Doctorow. He manages to capture the essence of the era in which his story is set without cluttering it with a trivia dump on that era. His stories are primarily character-driven. He populates Ragtime with a number of actual personalities of Guilded Age America (JP Morgan, Harry Houdini, etc.), but it's clear he researched them fully before writing. This carries over to his other works as well. As one reviewer noted, "Doctorow's highly readable novels combine history, imagination, character development, a sense of time and place and beautifully controlled and paced writing." In other words, a fine balance of the elements of novel writing.

Thanks for this enlightening comment. I shall refresh my memory of this author. I think I have one of his books in my library. Time to dust it off and reread!