As a writer I am always looking for articles to help me improve my writing. I happened upon an absolutely hilarious article by Hank Quense. His advice is given the other way around… but it works!

Hank: "I'm an author of five books and over forty short stories along with a number of fiction writing articles. From my experience, I've learned a number important lessons and I want to pass them onto others. One important lesson involves getting a book published; it changes your life. No longer can you sit in your office and spend your time writing more fiction. Once you become a published author, you also become the book's marketing manager and its sales manager, a terrifying situation if you're not prepared for it."

To protect others from the trauma of this situation, I've put together a list of fiction writing techniques that will guarantee non-publication. Following them will ensure a rapid reply from editors who will use a preprinted form or a terse email. This rapid reply will allow you to maximize the rejections you receive in a given period of time.

• Always use adverbs! Lots and lots of adverbs. One of your writing objectives should be to use an adverb to modify at least fifty percent of your verbs. And don't forget about using them in dialog tags. Why show the reader a woman shredding a paper tissue? Make it easy on the poor readers. Tell them the woman is nervous. Thus, "He's making me so fidgety," she said nervously. 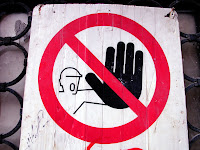 • A naked noun is evil! Adjectives exist to be used. Their primary purpose is to modify a noun, so make use of this most excellent writing technique. Load up your nouns with modifiers so the reader will have no doubts about the noun. “The skinny, ugly guy wore a hideous, ripped t-shirt, dirty, baggy pants and shredded sneakers.” Here's an even better example of clever adjective usage: “The scrawny boy used his undersized biceps to try to pick up the clumsy weight and place it in the old-fashioned truck before the foul-mouthed old man became aware of his clever trickery.” Get the idea? Remember, a naked noun is e-v-i-l!

“ How you doing?”
‘I'm cool. What’s up?”
“I'm good. Couldn’t be better. Watching the Yankees tonight?”
“Who they playing? . . . Yada, yada, yada.”
This stuff doesn't move the story along like dialog does, but it shows the characters are just as boring as real folk.

•Motivation is overdone. To properly show motivation requires a lot of creativity, time and words. It is much better to skip over that part and get right into the action. So what if the guy disarming the ticking bomb is only doing it because his shift doesn't end for two hours and he doesn't have anything better to do. The character doesn't have any motivation, but who cares; it keeps the story moving and doesn't slow it down with a lot of words explaining the motivation.

• Don't worry about Point of View rules. POV is perhaps the most technical of all aspects of writing and handling it correctly is time consuming and requires advanced planning. Who needs all that extra work when there is another scene to write or another crisis to defuse? Most of the readers will figure it out and sort of follow the story.

• The fine art of the -ing word. It's wise to develop writing habits such as peppering the page with –ing words. This technique will give your writing a pleasing sing-song effect. “Opening the door and running down the corridor while waving her hand, she tried shouting, calling attention to her life-threatening situation.” Doesn't that sentence make you want to hum along from all the –ing words?

• Use empty words. Very, really, ever, still, just and others are words with no meaning but they do fill up sentences and make them look more impressive. Fiction writing is filled with opportunities to use these words and titillate the readers. With a bit of imagination, you can also use these words to punctuate the sentence.

•Why bother with multiple-dimensional characters? Flat characters work just as well. Flat characters can fight, love and die just as well as the more complicated ones, but take considerably less work. The simple approach gives you more time to write still more stories.

• Character Voice. This attribute allows the reader to identify the characters from their dialog “voices.” What nonsense. That's what names are for. Just use the names in all the lines of dialog and the readers will be able to keep the characters straight.

Keep this list near your keyboard and refer to it frequently. Within a short time, your friends and family will be impressed by the huge stack of rejection notices you've accumulated. A side benefit is that your family will know you're really doing something in your office. Right now, they probably think you're goofing off and playing computer game. If you chose to ignore this excellent advice, there are alternatives listed in my book, Build a Better Story. Be advised that following the advice in Build a Better Story can significantly increase the response time from editors.

Award-winning author Hank Quense lives in Bergenfield, NJ with his wife Pat. They have two daughters and five grandchildren. He writes humorous fantasy and sci-fi stories. On occasion, he also writes an article on fiction writing or book marketing but says that writing nonfiction is like work while writing fiction is fun. He refuses to write serious genre fiction saying there is enough of that on the front page of any daily newspaper and on the evening TV news.


I am looking forward to reviewing Hank’s latest work Zaftan Entrepreneurs. In it, an alien mining ship discovers a planet that holds promise to be a mining bonanza. Unfortunately, it is inhabited by humans, dwarfs, elves and other races and they object to the mining expeditions. Sounds like a whole lot of fun. Watch this space.

Find out more about Hank on his website.
Posted by Fiona Ingram at 8:59 AM

It's nice to see Hank's tongue-in-cheek advice reaching a larger audience. Hank and I share a couple of writer' groups, and I love his work. He's currently working on a hilarious mish-mash featuring Shakespeare's Othello, Hamlet, and Falstaff which I think is his best work so far. I look forward to your review of Zaftan Enterpreneurs.

This is a really great post! I'm printing this article right away and keeping it with me always. I actually wrote a post about this recently (at least on the finer points of editing) on my blog under "I'm a murderer :D". I'm glad I won't be check-marking any of these any time soon. Thanks again!
http://writermeetslife.blogspot.com/

Hanks says:
Hi Jan
Thanks for the kind words. It isn't often a author gets to educate and entertain in one article


M.G. I'm glad you like the article. I had fun writing it