Say hello to my eighth Virtual Book Tour guest. Jo Davis has published two books, several short stories, and numerous web content pieces throughout the World Wide Web. She also writes periodically for the local news and is currently working on another local history text. Jo holds a bachelor's degree in English from Purdue University. When not writing, Jo helps others get their writing right. Her company Bylines by Jo specializes in content creation and editing. The BBJ team is comprised of seasoned freelance writers with experience in areas from construction to web design, gardening to midwifery. All writers are experienced in tailoring the voice and content of the article or piece of text to match that of the client. 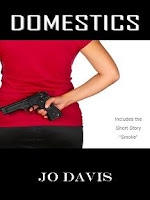 Domestics is a terrific read comprising two short stories that waste no time getting into the action. Sarah is married to Keith and severely abused by him. The day he beat their child Brandy to death, Sarah’s life forever changed. In a heated rage, Keith learned exactly what he has put Sarah and Brandy through. After the death of her husband, Sarah becomes a counselor for domestic violence. She helps these abused women in more ways than one. The day Rick comes into Sarah’s life, she finds herself attracted to a man after ten years of solitude. They seem to be a perfect pair, talking until all hours of the night. Rick is a Private Investigator and retired police officer. After the sudden death of his partner, he vows to prove it was murder. Little does he know that his new found love is tied into it. The last short story in this title is Smoke. Charlie finds himself craving the one thing he is most trying to quit....cigarettes. While on a plane, the craving becomes unbearable. He suddenly finds a cigarette in his belongings that he didn't know he had. Knowing he had a cigarette made it that much worse. When he decides to create his own fire, the airline attendants become worried about what he may be doing in the bathroom. Lucky for them, there is a Fire Marshall on the plane, but not so lucky for Charlie.

Review Comment: Davis did a magnificent job with this title. Full of action from beginning to end, I loved this book. I give Domestics ***** (5) Stars, B.K .Walker, Author of "Near Suicide" and "Dares And Dreams."

Chatting with Jo
Your career is steeped in helping other people get their websites or writing up to the mark—how and when did you decide to branch out into writing?
I found that a lot of my freelance work was doing just that. The clients that I created content for started asking other questions about their sites and keeping their material fresh. At first, I raised my prices to accommodate these extra tasks, but it became easier to just offer a separate service.

Your two books are completely different—one is non-fiction, and the other a short stories collection. Tell us how that happened!
I was actually commissioned to write the manuscript for Michigan City Marinas by the Michigan City Port Authority, as a 50th anniversary review. I got the manuscript published and found the accompanying photos to get the book that you see today. Domestics was a short story for a competition that grew to a small novel. I actually used Domestics to get the commissioned job.

You have a university background in English—did you ever dream or plan to be a writer?
Oh yes. I was an avid reader as a kid and a daydreamer. Writing was my way to create the different worlds like the ones I read about. Surprisingly, I began my college career as in accounting. I never knew anyone who made a living as a writer, so I believed that I had to make a living first and then write as a hobby. I know now that is not true.

What's the fun part of writing? Creating the people, places and things that make up the stories.
I am a daydreamer, as I said before, so it isn’t very difficult for me to imagine these what-if’s that make up fiction stories.

What's the hard part of writing?
Editing my own work. I see what I intended to put on the page, not what is truly there. I have to set my work aside for a while, detach from it, before going back and editing. That is part of the reason why I write longhand. I edit as I am typing the words in. This forces me to pay attention to the words. Even then, it is still work.

Do you have new books planned or outlined in your head?
I have a handful actually. I am currently editing Carrying On, a mystery novel about a single mother who is thrown into the middle of a murder mystery. She is under qualified and her best detective is a career criminal who is constantly getting caught. Meanwhile, another case surfaces that involves two grown men, a pink Cadillac, makeup and drug deals. There is also a very hyper ferret that goes by the name Fred.

Switching from nonfiction to fiction—was it easy/hard/a cinch?
I wrote the nonfiction book like a novel, with characters, plot, conflict, etc. I am told that the book isn’t like other local history books. It is full of pictures, but beneath them are not captions, but the story behind the marinas’ rise from mud pit to a yacht harbor.

Some advice to writers—the best advice you ever got/something you should have done but didn't...
I was much younger when I heard a famous actor say to find your passion, think of the one thing that you think of when you lay down at night and that is on your mind when you get up in the morning. That is your passion. Practice it often and it will become your life’s work.

Tell us something you'd like readers to know about you or your work.
I am not one of the disciplined writers with outlines, plotlines and structure about doing the work. I just write. I create. I sometimes wish that the disciplined, structured way was mine, but what fun would that be?

My thoughts exactly! Want to find out more about Jo and her books? Visit her website Bylines by Jo for more info and book purchase.
Posted by Fiona Ingram at 3:12 AM