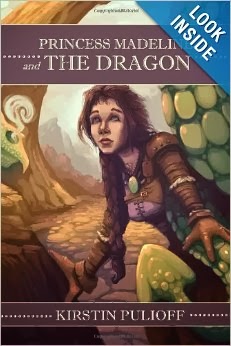 All is well in the Kingdom of Soron; at least, that’s what everyone thinks. The village has been rebuilt since Prince Paulsen’s disastrous attack the previous autumn, and preparations are under way for the Spring Faire – a very important occasion. Princess Madeline is also preparing for her upcoming wedding to Daniel, and the prospect of establishing a new home in the North. The wizards, now welcomed back after their timely assistance during the previous troubles, have a new role to play. Madeline has been having strange dreams, and the Elder Wizard, in fact her Uncle Elias, is trying to teach her to harness her magical powers, inherited from her mother. Then things turn horribly upside-down, as we have been warned via the prologue, where Lord Hawthorne (hunting for dragons’ eggs) stumbles upon a rare clutch of these magical eggs. Amazingly, a green dragon appears and begins to ravage the kingdom. The fiery attack ends with King Theodore being badly burned to the point where he insists on Madeline’s marriage to Daniel right away; and he appoints Madeline’s twin brother Braden as King of Soron. The dragon is fast becoming a huge and dangerous problem. Will Madeline and Braden be able to decipher the clues left by their mother that spoke of the Age of Dragons? And why is the dragon suddenly attacking the kingdom?


Kirstin Pulioff has cleverly sown the clues to the final book in the first and second books, where seemingly innocuous items hold the key to solving the mystery of the green dragon. Braden, somewhat neglected in books one and two, comes into his own and pulls the readers’ focus as he takes charge of the kingdom, and finds the path of love not as smooth as he had hoped. Madeline has really grown up here, and her thoughts on resolving the kingdom’s dilemma differ greatly from her brother’s. Her way is based on love, reason, reconciliation, and truth. The wizard Elias also has a lot to teach both the characters and young readers and his words of wisdom are beautifully woven into this rich fantasy tapestry. Again the author’s gift for description stands her in good stead as the dragon, in all its flaming fury, is brought vividly to life in the pages of this magical fairy tale. Princess Madeline and the Dragon is well worth the wait as there is something for everyone: romance, love, enchantment, magicality, wizards, action, adventure, and of course … here be dragons! Five Stars
Available from Amazon
Posted by Fiona Ingram at 10:15 PM

Saw this on the Blog Hop and clicked on it because it reminded me of The Princess and the Paper Bag, a childhood favorite of mine. I'm not familiar with this series, but it sounds like it has some solid and intriguing world building.

This is an enchanting series that will appeal to girls of all ages. Lots of magical and creative world-building. I read the books one after the other and they flowed beautifully as a story.

I definitely found this final book to be the strongest of the trilogy. I, too, liked that Braden finally got fleshed out a bit more and got o have character development.

Thanks for sharing on the Kid Lit Blog Hop!

Yes, I agree about Braden. There is even room, I think, for something branching off for boys with Braden's story.

I really liked this story too. I haven't had the chance to read the other books in the series. Thanks for sharing your review on the Kid Lit Blog Hop.

I'm thinking you almost can't go wrong with dragons...especially when looking for books for boys! Thanks for joining us at the KLBH once again! I'm extremely late in my hopping this time. Forgive me, and see you again in the Linky next week!

I agree! I am a total believer in dragons. Just love them. Thanks for commenting.

This looks like a fun book! Thanks for sharing on the Kid Lit Blog Hop.