Yes, it's true, I am knee deep in vampire writers it seems because my ninth Virtual Book Tour guest is vampire author Katie Salidas. 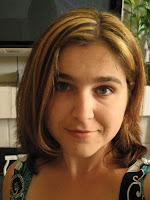 The youngest of four children, Katie has always had a desire to entertain. Since, early childhood, she's dreamed up fantastical characters and scribbled them into pages of various journals and notebooks. Taking an interest in vampires at an early age, she devoured every book, featuring those blood sucking creatures, in any genre she could find. She claims that, of all the monsters out there, vampires had always been the most interesting. It was only natural that a love of reading about vampires, and a love of writing, turned into a desire to write her own stories. A Las Vegas native, having grown up in the famed City of Sin, Katie loves to feature it as a recurring setting for many of her stories.

The book Katie would like to feature is Carpe Noctem, a riveting book in the Immortalis series. 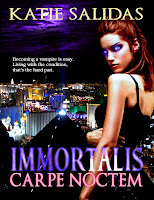 Bleeding to death after brutal mugging on the campus of UNLV, Twenty-five year old Alyssa is rescued by the cold and aloof, vampire, Lysander. Taking pity on her, he shares the gift-and curse-of immortality. She awakens as a vampire and is soon devastated by harsh realities of her new way of life: the loss of her friends, her independence, and her humanity. As if having her humanity stripped away was not enough to make life interesting, Alyssa finds out her “turning”, did not go unnoticed by the rest of undead society. Old enemies; an ancient sect of vampire hunters, known as the Acta Sanctorum, as well as a powerful Vampire mistress, each set plans in motion to destroy both Alyssa and Lysander. Only by accepting her newfound immortality, seizing the night, will Alyssa hope to survive. She and Lysander must fight together against two sets of enemies bent on destroying them both.

Sounds like something one can sink one's teeth into ... er ... should I be saying that? Hey, let’s get into the mind of a vampire author with Katie.

You have always been fascinated by vampires. Big question: WHY? What is the appeal? (Tell me in dripping detail). What is it about them, or the concept of these undead underworld creatures that turns you on, inspires you etc.
Ahh, why is such a big question to answer. Ha! I guess I would have to break it down into levels to properly convey my love for the creatures of the night. For starters, my original interest stems from an age-old fear. Many of us fear death. It’s part of the human condition. Death is inevitable. The fear though is what lies on the other side. It’s a great unknown and that is where the real fear is. Growing up in a religious household, I was taught that it is heaven on the other side but can one ever really be sure what awaits us? It’s no secret that I fear death and always have. That is why I find the vampire so intriguing. They, though fictional, are immune to that mortal condition and thus, are able to escape that often scary unknown on the other side. Reading about vampires allows me, for a time to escape that worry too. To be able to fantasize about the ability to live forever is a pleasant thing. It’s the escapism that first attracted me.

While escaping from the mortal condition I am also able to indulge in fantasy too. Let’s not forget that vampires have an inherent sex appeal. In books, at least modern fantasy and romance, they always seem to be chosen and turned at the peak of their lives. They are at their most virile.
Males are hard bodied and don’t have an ounce of flab on them. (Every woman’s dream, right?) They have piercing eyes that can reach into your very soul and mesmerize the pants right off of you. Once they’ve got you in their strong, capable arms, you just want to melt. Their strength represents power and protection (once you know they want more than just your blood. LoL). They are the ultimate bad boy. And women, we cannot deny that somewhere deep down, there is a lingering desire for the danger and excitement they offer. That’s part of the fun of fantasy. We can put ourselves into the other characters shoes and have the bad boy for a time without the lasting negative effects. Let’s not forget the teeth either. They are part of the sex appeal. They are not only phallic on a subconscious level; they represent the very real danger that makes you tingle with anticipation. Think about it? Where do vampires typically bite? The neck. It’s a known erogenous zone. Need I say more? Vampires let us indulge in multiple fantasies all the safety of our homes via: books, movies, and TV.

What are your vampires NOT? What makes your set of characters unlike any others, given the plethora of vampire related themes right now?
My vampires don’t sparkle that is for sure. Though the sparkly vampires have come under great scrutiny, I have to applaud Mrs. Meyers for attempting to blaze her own trail. Let’s face it, vampires are everywhere. It’s hard to stand out from the crowd. Cheesy or not, she made a lasting impression with her interpretation. As for mine, I tried to keep their humanity. I wanted them to be real creatures who struggle with what they must do to survive. No one struggles more than Alyssa, whom the story of Immortalis follows. As a newly-turned vamp she is forced to make choices she hates. Think about it. Would you really be able to kill a person for their blood? Most people might say, “Oh, well if I was a vamp I would have to. So yeah.” Easier said than done. That’s what I wanted to focus on with my novel. Sure, you could probably do it if you had to but it would weigh heavy on your heart. Guilt over having to end someone’s life to keep yours is a struggle. Alyssa has to come to terms with this and other issues as a newly turned vamp. I wanted to really give readers the gritty reality of it. To show in full detail what “turning” could be like.

Have you a line/few words from one of your characters that truly defines your world of vampires.
Yes, absolutely. To quote my dear Lysander: “Becoming a vampire is easy. Living with the condition, that is the hard part.” That quote, really sums up the feel of my novel. It is all about the turning and living as a new-born vampire. Carpe Noctem, seize the night. To be a vampire you have to learn this and do it, otherwise, you might as well submit to final death. It’s certainly not Hollywood glitz and glamour but, in the end, it might not be as bad as you thought.

Are you married to a vampire?
Honestly I think it is the other way around. My poor husband is married to a nocturnal creature. I do most work at night and can often be found up at my computer till about 3 in the morning. That makes me a beast to deal with in the morning. Ha!

There you have it dear readers, the truth about vampires from the expert. You can visit Katie on her site and purchase Carpe Noctem on Amazon.
Posted by Fiona Ingram at 8:15 AM

Thank you for hosting me on your site! It was a pleasures speaking with you.