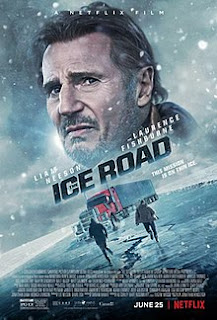 “An explosion at a mine in Manitoba traps 26 miners. Mike McCann and his brother Gurty, an Iraq War veteran suffering from PTSD and aphasia, work for a trucking company until Mike punches another trucker for referring to Gurty as a "retard", and they are both fired. Mike hears about ice road truckers needed in Winnipeg, and they apply. Jim Goldenrod, another trucker, agrees to lead a rescue mission to deliver wellheads to the mine. He hires McCann and Gurty, along with a young woman, Tantoo. Also joining is actuary Varnay, responsible for insurance risk assessment for Katka, the company which owns the mine. The prize money of $200,000 is split between the four truckers, which will be redistributed among the survivors if anyone dies. Meanwhile, the miners are communicating with Katka executives, and Katka General Manager Sickle transmits a message that they plan to free the men by blasting a tunnel.” (Wikipedia)

I had no idea what an ice road was, so I looked it up. Wikipedia (again!) says: “An ice road (ice crossing, ice bridge) is a winter road, or part thereof, that runs on a naturally frozen water surface (a river, a lake or an expanse of sea ice) in cold regions. Ice roads allow temporary transport to isolated areas with no permanent road access. They reduce transportation cost of materials that otherwise would ship as expensive air freight, and they allow movement of large or heavy objects for which air freight is impractical.” It sounds dangerous. It is very dangerous, as you will see when watching this movie.

Yes, the movie plot is simplistic and even predictable in places but with Liam Neeson and Laurence Fishburne heading up the cast, it is eminently watchable, not matter what the critics say. There is enough tension and suspense to keep you riveted, plus lots of feel-good moments. While the rescue mission seems altruistic, of course big corporations have no intention of keeping their word and it is a race against time and the baddies to reach the mine before the trapped miners breathe their last. I am a fan of both these stars, and I always find their performances realistic and passionate. They give their all. There are some familiar faces amongst the other cast members. There is even a surprise member; Skeeter, a pet rat. You will be clutching the edge of your seat and shoveling down the popcorn while you watch. PS: Against all odds, and there are plenty, Skeeter survives! A five star recommendation from me.