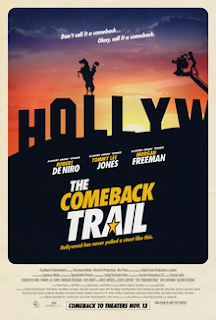 Movie producer Max Barber (Robert de Niro) and his naïve but starstruck nephew and partner Walter are in dire straits with yet another movie (Killer Nuns?) bombing at the box office. Trouble is, they owe a lot of money to a mobster called Reggie Fontaine (played by Morgan Freeman). Reggie wants his money. Now. While on another set, Max sees a terrible accident in which the leading man is killed by falling off a building during a shoot. No worries, he’s insured. Slowly but surely the seeds of a plot unfold as Max convinces ageing has-been spaghetti Western star Duke Montana (Tommy Lee Jones) to pick up his cowboy hat and star in a new movie. Duke, who was contemplating suicide, having nothing left to live for at an old age facility, agrees. The trouble is, Duke seems to be unkillable. And Reggie wants his money. Now!

The Comeback Trail is a remake of the 1982 film so is set in the era with the same movie making techniques, the same dinosaur attitudes to women – the director is a female – and the same old Western cliches which are evergreen and appealing. Don’t expect an Oscar-worthy film here but do expect a lot of laughs, some nostalgia for how it was way back then, and actually a kind of admiration for how they shot movies and somehow managed to pull together some very watchable stuff. Freeman, De Niro, and Jones have some memorable comic moments and there are screamingly funny scenes which they play deadpan and heaven knows how they do it. Make popcorn, sit back, and have a very good laugh. I know I shouldn’t but I’m rating this 5 stars for sheer chutzpah!