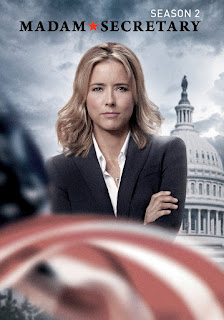 I came late to Madam Secretary and loved it until halfway through series 4, when Nadine left and the script took a decidedly radical left wing/woke/loony liberal swing. On the plus side, the cast is perfect and there are some lovable characters like Blake, Matt, Daisy, Mike B (let's not forget canines Gordon and Waffles) et al. Tea Leoni and Tim Daly are a real-life handsome couple and they have the right charisma and spark between them to make the screen relationship credible. Their family is played by great young actors who are all so believable. Pres. Dalton and Russell Jackson (who has some of the best lines delivered with Machiavellian and devilish charm) are also excellent. The problem is the consist playing on left wing social themes and dragging these into the politics of the script. Viewers have it drummed into their heads that unless they go along with the woke policies the producers are clearly espousing, they, like the 'bad' characters, are racist/bigots/Nazis or worse.

The stories got so boring after a while that, sadly, I did not even finish Series 5 and I am disappointed - but I could not sit through yet another episode of woke virtue signaling. The character of Kat Sandoval was a mystery to me and a shabby replacement for Nadine played with such charm and grace by Bebe Neuwirth. Kat's gender confusion, bad wardrobe, and hideous hairstyle says nothing about the character except she was clearly the LGBTQ poster 'girl' for the series. The actor played her with enthusiasm and energy and that's all credit to the performer. But producers need to reassess what an audience wants. If you have a political series, keep it that way. (Another good production that went down the same dismal woke drain was the third series of Designated Survivor with a dreadful last season that alienated viewers and played out every possible left liberal policy imaginable.) Back to Madam Secretary, I could not believe they even had that insufferable Hilary Clinton on the show. That was just too much for me. 3/5