Book Review: Frankie Dupont and the Mystery of Enderby Manor 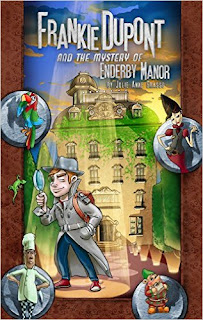 Meet Frankie Dupont, budding detective in Frankie Dupont and The Mystery of Enderby Manor by children’s author Julie Anne Grasso. The mystery surrounding Enderby Manor starts right away with the disappearance of budding detective Frankie Dupont’s cousin Kat. In fact it all began with Kat’s abundance of pet geckos. The last straw was when Kat’s dad found a gecko in his cereal. He put his foot down and the family checked into Enderby Manor while their home was degeckoed. That was when Kat disappeared from her room, her parents went into hysterics, and the mystery began. It’s up to her cousin Frankie, budding detective, to solve the case. Unfortunately his efforts are hampered by the bumbling Inspector Cluesome, who treats Frankie like a kid. Undeterred, Frankie continues his investigations, heeding his dad’s advice: follow the evidence trail and go with his instincts.
The plot thickens as Frankie meets a cast of characters who are very suspicious in their activities and seem to be hiding something. Nevertheless, Frankie presses on, using his detective devices such as an Evidence Sampler, Fingerprint Fixing Spray, and a Fingerprint Diagnostic Device. But creepy Enderby Manor itself (the perfect setting for a mystery) doesn’t make things any easier. Frankie had never heard of it and it doesn’t show up on satellite images! Does it even exist, and if not, where could Kat be? The clues are in Enderby Manor’s past and the death of its owner years ago, but can Frankie solve the mystery and find Kat before he runs out of time? Can Frankie solve the world’s first inter-dimensional mystery?
Young readers and fledgling detectives will absolutely adore this mystery. Frankie is clever, scientifically minded, and undeterred by Inspector Cluesome’s efforts to put him down. The supporting characters are hilarious and memorable: the chef Simon le Mont and his sous-chef, the parrot Igor who is full of rude comments; receptionist Madame Mercure, who is more interested in her manicure and make-up than a missing guest; and gardener Gerome Genome a … well … garden gnome! I really loved the black and white illustrations by David Blackwell and Samantha Yallope. They added to reader enjoyment and are perfect to help a young reader get immersed in Frankie’s activities and the story. The science part of the investigation will also appeal to kids, especially the wild and weird things that might happen … with Kat’s fate teetering in the balance. What a wonderful, action packed, five-star adventure sure to appeal to girls and boys. This is Book One in the series so be sure to follow Frankie’s future adventures.
Visit Julie’s site for the latest news on her book titles and social media details.