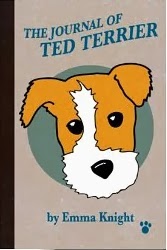 The Journal of Ted Terrier by Pawthor Ted Terrier and his scribe (also a Pawthor) Emma Knight just has to be one of the funniest and wittiest observations I have read on humans and their erratic behaviour, from a dog’s point of view. Ted Terrier, a more than intelligent Jack Russell, lays his family bare, revealing the universal human condition of weakness, insecurity, foibles, and failings, seeing life though rose-coloured specs, and the many other silly human things that silly humans do. His journal spares no one and from six-foot-something head of the family Peter, to depressed mum Jane, to amanuensis sibling Emma (who struggles to hold onto her creativity, hence this book to help her get it back), to the various visitors (so few…), Ted gives readers the benefit of his psychological observations. He is honest, fair, and alarming perceptive, especially if you are a human reading this book and you recognise some of your (ahem) failings as a member of the dominant species.


Ted starts right off by confessing his obsession with feet, and gives us a description of his family’s feet. The smells of his family’s feet, to be exact. Interesting. That gives readers an idea of how dogs see humans: as smells, not as looks and height. Anyone taller than a human child is very big to a small dog. On the philosophical side, Ted waxes lyrical as he explains the difference between human and dog thinking. Humans’ problem is they think too much and they end up confusing themselves and making their own lives difficult. From there he touches on the benefits of Sunday walks (and everyone knows every day should be Sunday); the problem with religion; how bad it is to get upset; what exactly is black comedy; and what really matters in life. On a practical side, he observes that dogs have it much easier because they wear their clothes (fur) all the time, and how communication with humans can be difficult (i.e. what not to do to visitors’ legs).
The absolutely fantastic illustrations give readers a very clear picture of what happens in Ted’s household and I had many laugh-out-loud moments. Witty, sometimes acerbic, and with comic observations any human will appreciate, The Journal of Ted Terrier will make you see your dog in a very different light. Have you ever said or thought, “If only the dog could talk…” Don’t think that. The dog might surprise you! (Five Stars!)
Keep up with Ted’s observations on life by visiting his Facebook page and his blog.
Posted by Fiona Ingram at 7:35 AM