Alexander McKee, a mixed-blood British Indian agent, was one of the few individuals in history able to unite Indians and exert unbelievable leadership on their behalf. When the War for Independence broke out between the Colonies and the British, McKee chose to remain loyal to his mother country. He played a major role on the American frontier during the French and Indian War, the American Revolution and the post-war era. Because of his selfless devotion to the British and the Native Americans, he forfeited massive real estate and social standing when he left his Pittsburgh mansion to organize Indian raids on the American frontier, for which he was branded a traitor by the Continental Congress.

It’s hard to make history come alive, but in the capable hands of author Frederick Wulff, the historical character of Alexander McKee, a British Indian agent of the colonial frontier, springs vibrantly from the dusty pages of history books. The author uncovers the tragic realities and the bloody consequences of colonialism and the sad disintegration of the Indian way of life as the white man’s behaviour and lawlessness eroded their culture and their rights. The devastating effects of the rum trade cannot be underestimated. The author also reveals the incredible personal story behind the man who played a seminal role in this compelling and chaotic piece of American history. Born of a Shawnee mother and a British father, choosing sides could not have been easy for McKee in the culture clash between the land-grabbing colonialists, the traders, and the Indians, the original 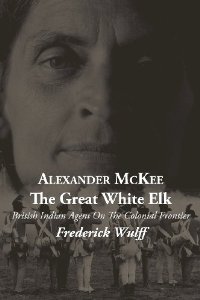 inhabitants of this new territory. McKee was a man who could straddle two cultures, understanding both, but ultimately choosing to speak up for the displaced Indians, and losing much in the bargain. McKee is revealed as an exceptional man, intelligent and educated, perceptive, and possessing great leadership qualities. From his mother he learned the values and traditions of her people. He helped broker a precarious peace between Indians, traders, and settlers. McKee earned the title “The Great White Elk,” and this term of respect and admiration was well-deserved as he maneuvered British frontier policy and promoted the interests of the beleaguered Native Americans in the post-Revolution era. His principles and actions did not appeal to later historians who branded him a traitor.

Frederick Wulff’s account of this remarkable man will keep history buffs captivated. Minutely researched and written with a deep understanding of the era and Alexander McKee, this book is an excellent read. The author has an easy-to-read style that makes the wealth of information easily assimilated. Five Stars. Highly recommended.