The Imaginarium of Ami Blackwelder

I have such a fascinating VBT guest today. Ami Blackwelder is an author whose wide ranging interests take her from one end of the imaginative scale to the other. While many authors would like to expand their skills with a couple of different forays into genres, Ami seems to glide effortlessly into a variety of genres. Author of Rain: Graphic Novella, Guardians of the Gate, The Day the Flowers Died, and The Hunted of 2060.

Tell us about yourself, Ami:

I was raised in California and then in the third grade moved to Florida. I attended the University of Central Florida where I received my BA in English creative writing and teaching. After college, I did a lot of traveling as a teacher to countries like China, Tibet, Nepal, Korea and Thailand! I’ve always loved storytelling. As early as Elementary school, I wrote long inventive tales which my teachers would read in front of class. I took it more seriously as I grew older. I wrote primarily poetry and short stories in my twenties, but in my thirties I have written spiritual books as well as novels. I write paranormal and historical romance which focuses on the forbidden love aspects of characters because of culture, religion, time, gender, death, and species differences.

Ami, reading over your list of publications, I am astounded at the range and variety. What a range—from Christian topics and the bible (Genesis) to a graphic novella, to Munich in 1930, to an elfin romance, to the year 2060! Quite a variety of topics and you obviously have an incredible imagination.

Please tell us how you were inspired for each of your books, what you brought to bear from either your travels, education or research in creating each of your works, and where you see yourself settling comfortably in a genre, or will you continue to be a gipsy wordsmith.

I graduated from UCF with an BA in English and teaching credentials. I traveled to Asia for eight years, teaching primarily kindergarten and writing. I began my writing career with short stories and poetry in my twenties, winning Best Fiction awards and publications in magazines and newspapers in Korea and Thailand.

In my early thirties, I delved into religious topics such as The Ancient Genesis (Creation and Evolution debate) and re-educated myself about Christian issues in Christianity and Sensibility. My overseas adventures helped to inspire my book The Other Five Senses which also incorporates Eastern religions.


Readers will be engaged, entertained, and sometimes enraged with my novels. Currently I am switching publishing companies from 'Creative Endeavors' to 'Eloquent Enraptures.' My books are being re-edited and re-designed with covers and being re-submitted to online and offline venues. The Hunted of 2060 and The Day the Flowers Died are both complete with the transition. My other works will soon follow.


I will be having my first book signing shortly for The Hunted of 2060, my latest work. I am currently working on the prequel, The shifter of 2040, which fans of that novel will love to hear! It is a new book, but has already caught a lot of buzz. Inspired by metamorphosis, wildlife conservation, and prejudice, this novel is a teaching tool within the framework of original, and intriguing shorelines. 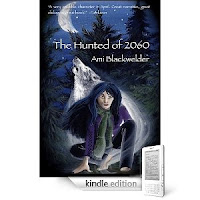 Set in Alaska in 2060, when April enters her Sophomore year at University, she thought Robert might be the love of her life, but as she discovers, she is hiding something inside her, something the rest of the world believes to have died out. She struggles with who she was and who she is becoming as she learns of a family she never knew existed and of enemies she will have to outrun, outfight or outwit to survive. As April embraces her new identity, will she have to leave the life she loves behind? With underlining themes of how prejudice breaks human connections and animal/wildlife conservation, this novel which has received rave reviews will leave the reader flipping through the pages of April’s story.

Please visit this fascinating author's website for downloads and more purchase details.
Posted by Fiona Ingram at 3:18 AM

amiblackwelder.blogspot.com is the NEW website and so find me and my books there for more info!!! the old website no longer works. Sorry.