How to (Really) Write About Real Locations

When I read Joanna Penn’s excellent post on How to Write About Real Locations if You Haven't Been There, I felt very fortunate that I had been able to visit Egypt prior to writing my middle-grade adventure The Secret of the Sacred Scarab. Joanna gives excellent advice on how to recreate for readers the sense of ‘being’ in a place. Top of her list is, of course, actually going to the particular location.

Any location is unique and there is pressure upon the author to describe it so that the readers can relate to it, enjoy it, and believe in it. Location is not just a geographical point on a world map. It’s a mixture of sights, sounds, smells, sensations, tastes, and the ambiance or atmosphere that comes with its people, history, culture, architecture, and art. Would you believe it but light, something so simple that we take it for granted, is different in other parts of the world. Sunlight in Egypt is unforgettable—blinding, glaring, beating down upon your retinas so that unless you have sunglasses, your poor Westernized eyes will remain squeezed shut in desperation as you try to shut out the probing rays. On the other hand, when darkness falls, it’s really dark. The sand dunes that once were a blazing sea of endless saffron yellow turn the purple of bruised plums as the sun finally sinks in the west.

Joanna also outlines next-best options for authors not able to travel. These include guidebooks, travel blogs, Google Earth, interviews with experts, and (very importantly) research. These options shouldn’t be considered second best in any way because even though one may be fortunate enough to make a trip, there is hard work to be done when putting a story to paper. I am a natural collector and accumulated air tickets, stubs from entries to monuments, menus, postcards and the usual array of stuff that finds its way into travel bags. Photographs were vital for me—I was shocked to find that after a few weeks my memory of where exactly that fascinating statue had been was a bit hazy. I also muddled up the locations of two very famous temples (horrors!). So, with the help of a guide book, a clear map, and all my photographs, I was able to recreate the journey and make a ‘collage’ to guide me as I built the journey line of my two young heroes. Since I modeled my heroes on my two nephews, it was important for me to get a feel for how two boys would react in such a foreign (and potentially dangerous) environment. 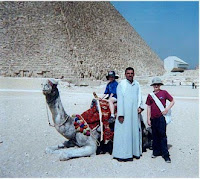 I’d also recommend souvenirs to jog one’s memory. I bought quite a few miniatures that really helped me recreate the haggling scene in the Egyptian market at Esna, and brought back the sounds and smells of people, incense, food, spices and much more. The taste of the food was unforgettable. Do you know the best olives and cucumbers are found in Egypt? The crisp, cool, almost sweet taste of a cucumber so juicy and refreshing that one just wants to gobble the whole thing down. The tart tang of a black olive on your tongue … spicy yet so tasty that one or two are just not enough.

When Joanna mentioned interviews with experts I immediately remembered Leila, our fantastic guide who was a walking encyclopedia of knowledge on Egypt. Contrary to what one might think, travel guides (the official ones) in any country, have to have a vast amount of knowledge on their subject. It came as no surprise to find that Leila had a university degree!

Finally, the hard slog of research. I think Egypt was even more daunting than I imagined because so much has been written about the country, its history, and its culture that I felt under enormous pressure to check, double check, and check again (just in case) all my facts. There are also conflicting opinions of experts so one has to be careful whose opinion one chooses. It’s seems a shame that hours of research go into looking up facts that will make a perhaps brief mention in the chapter concerned. After all, there is no point in inundating readers with lots of information. Details should be carefully and subtly woven into the story, always being an integral part of what the heroes need to know to move along in their story.

So, after the excitement of Egypt, what’s next? The next book in my adventure series Chronicles of the Stone takes place in Scotland, where the heroes are in search of the Second Stone of Power. The title is The Search for the Stone of Excalibur and that should be enough of a clue for fans to see where the story is heading. I have already spent a few amazing weeks in Scotland, researching old castles. Ask me anything about castles … with or without drawbridges, moats, portcullises, battlements … you name it, I visited it. Finally I settled upon the fabulous, fairytale setting of Dunrobin Castle, for me an exquisite vision, as the setting for Book Two.

And how far ahead should one plan? Book Three—The Temple of the Crystal Time-Keeper— takes place in South America and although I have not quite fixed the location I am planning a trip in the near future. For me there’s nothing to beat the reality of location.
Posted by Fiona Ingram at 7:43 AM

Hi Fiona, thanks for the mention! I enjoyed your travels as well - I think books need to have settings that people are interested in and want to go to (and it's a great excuse for a holiday for us writers!)

Have a good weekend, Joanna